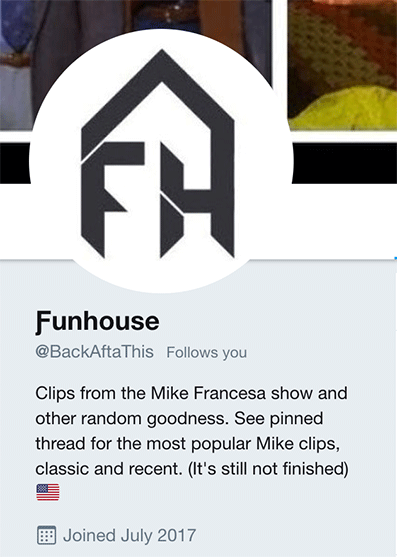 When asked to describe himself to SportsbyBrooks.com, the man who has, at least for now, all but dedicated his current existence to chronicling the on-air life and times of WFAN radio host Mike Francesa responded thusly:
“I am an avid sports fan, mainly college football and NFL, and a long-time listener of sports-talk radio, mostly WFAN of course. I grew up in Western Mass. and now live in Connecticut.”
Onto the questions for Monsieur Funhouse …
SbB Question #1:
Describe what you do on the Twitter account and the evolution of it from the beginning until today.
Funhouse:
This is actually Twitter account #2.

The first one lasted from 2014 until July of 2017, and it got permanently suspended due to repeated copyright violations for posting MLB highlights. Lesson learned. MLB doesn’t mess around!

I was bummed out, because I enjoyed interacting with everyone. I wasn’t sure if I wanted to go through the process of starting another account, but I gave it a shot.

Most people recognized pretty quickly that I came back, and I picked up where I left off, posting clips from Mike Francesa’s show.

The backstory on that is, I had listened to Mike and the Mad Dog since the 90s. Loved everything about it. They were magical together. I rarely called, but I enjoyed the program.

When Dog left for Sirius, it was like a funeral. Nobody knew what was next. It took very little time to discover that they need each other. Badly.

They were a perfect team. Appointment-radio every day.

Because their solo shows overlapped, I chose to listen to Mike every day. I didn’t need a subscription to listen to Mike, and frankly, listening to Mad Dog solo for hours at a time is a lot to handle. He’s a bit looney.

But as I listened to Mike working solo every day, a lot of things started to bug me.

He’s never wrong. He treats his callers like garbage. He lies and contradicts himself constantly. All of it.

So I bought some software which allowed me to record his YES show, and later his FOX Sports 1 show, and I began posting his clips on YouTube.

Mike buys into a ridiculous urban legend about the military exploits of Captain Kangaroo and Mister Rogers. 🤣🤣 If you listen to only one clip in this thread, make it this one. pic.twitter.com/W7wv101pr6

Make no mistake, if WFAN didn’t want me to post clips from his show on Twitter, they would have shut me down already.

No publicity is bad publicity in the radio game, especially when he’s locked in a ratings war with Michael Kay.

But the fact of the matter is, I have a large following of influential people in the media world, so whenever Mike says something funny, controversial or just plain dumb, the clips I tweet end up on websites everywhere.

The station realizes the exposure is good for him in the long run, otherwise my account would be a memory.

I only had a few thousand subscribers on that old YouTube page, so that was a minor annoyance to them, I suppose. Twitter reaches a larger audience.

The funny thing about Mike’s show is, as much as he irritates me, I still got a lot of enjoyment out of listening.

That is, until the last six months or so. It was a mistake for him to come back after leaving WFAN on December 15. He’s
putting a terrible product on the air daily.

He’s beyond miserable, his voice is shot, he repeats the same stories dozens of times, and he hates his callers.

It seems like the only reason he has to turn his mic on every day is to sell subscriptions to his app, which has become a punchline to his hardcore fans, and to relive some past glory.

Not a day goes by that we don’t hear about numerous athletes and coaches that he “knows very well,” or we’ll have to sit through stories about all the events he’s been to.

They are segments where Mike asks questions, and Mike answers the questions. His guests are rarely allowed to finish a sentence. He’s without a doubt the worst interviewer who has ever walked the earth.

There’s no joy in this show anymore. None.

I want him to leave with whatever dignity he has left.

The next question, which I get a lot, is “So why do you still do this?”

The answer is because I’m not a quitter.

I built this account with the promise of providing clips from Mike’s show every day, and I’ll continue doing so even though listening to his show is a CHORE and cutting up clips is a lot of work for which I’ve never taken a penny, by the way.

It’s not my content, so I can’t profit from it.

I figure I can hang in there until Mike walks away again, or until the station has had enough of me.

Either way, I’m fine with it, and it’s (mostly) been fun.

Do the San Francisco Giants and New York Giants ever get together for dinner? pic.twitter.com/zsypHlXXW9

Describe any specific and/or general reaction you have gotten from Mike and/or his representatives.

Mike has only acknowledged my existence once publicly, that I know of.

It was a couple of years back when he made controversial comments about women not being equipped to be head coaches in men’s professional sports.

The audio was blasted everywhere, and he got killed for it.

The online sites embed my tweets right into the body of the story, so obviously he’s seen them more than a few times.

This particular time, he went on the air and basically blamed the whole thing on me.

“There’s this one guy who follows me for every breath I take,” and he alluded to me posting it.

The great Dennis in Dumont with the finest troll job ever, and I don't think it can be topped. "Mike Vaccaro wrote an article about it in the Post." pic.twitter.com/gtfmUJSaBa

Actually, his staff did. They didn’t want him seeing my tweets. Smart.

As for his representatives, I used to DM with his executive producer almost daily for four years, because he was pretending to like me in order to reign me in as best he could.

It was a “keep your enemies closer” scenario. I understood that.

He finally blocked me a few months ago when I kept hammering Mike, and life has been good ever since.

For him too, I suspect.

Other than that, I’ve had no contact with anyone in a position of authority.

I know for a fact that the program director knows about my account.

One time recently, he scolded a rogue employee who tried to report me to Twitter for copyright infringement.

He made the employee drop the complaint. That made some sense to me.

Again, I’m just a dope who spends a good chunk of his day cutting up Mike’s clips, but I think they do appreciate the exposure it brings Mike.

Not a day goes by where I don’t get a message from someone telling me that they didn’t know who Mike was before one of my clips showed up on their timeline, and now they listen to his show.

I am happy about that.

Caller wonders how Mickey Mantle could have won the Triple Crown without being a horse. pic.twitter.com/MVrGLfmRL0

Do you have any future plans to expand what you do to a website or through another venue?

None whatsoever. I have a career outside of Twitter. 😁

As much time as I spend doing this, it’s still a hobby.

I have a giant computer monitor to my right for cutting up clips, and other TVs to my left with the sports on them.

Even if Mike didn’t exist, I’d still be sitting in this recliner watching sports, so it’s not like it’s infringing on my personal time.

Once in a great while, if there is an A+ clip that must be posted immediately when I come home, I’ll put dinner off for a little while.

Mike Francesa, master of the heartfelt eulogy, reacts to the deaths of Stan Lee and Frank Robinson. pic.twitter.com/LTA8WrwoN5

Other than that, it’s usually a labor of love.

As far as life after Mike…. if a website wanted to hire me to do video editing for various shows like I do with Mike, I’d certainly listen.

Howard Stern listens to the clip of Mike Francesa not having a clue about Stan Lee. Thanks to @TheRick7 for passing it along. pic.twitter.com/WnIOS3TThX

There’s just not a lot of time for that now. Mike is a full-time job!