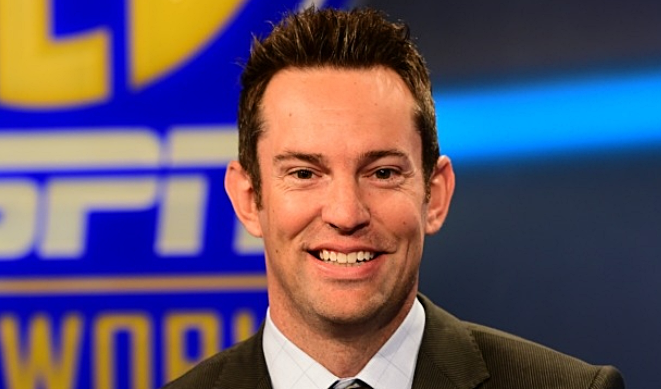 No can ever accuse Peter Burns of having any facet of his professional broadcasting career handed to him.

His rise to become one of the primary faces of ESPN’s successful SEC Network beginning in 2014 is testament to Peter’s ingenuity, perseverance and an entrepreneurial spirit that is impossible to miss when you visit with the Baton Rouge, La., native.

Prior to his current, extensive duties at the SEC Network, which include hosting the daily SEC Now television show with Dari Nowkhah and SiriusXM’s SEC This Morning with Chris Doering and Greg McElroy, Burns hosted a syndicated sports radio talk show based in Denver and a national, Fantasy sports-based show on Fox Sports Radio for five years.

Navigate for us the circuitous route that led you to landing what many people consider to be a dream job.

In fact, I’ve got the number “5,000” printed out in my home where I do my radio show as an everyday reminder that if that my job became available tomorrow there would be 5,000 people that would apply for it.

That sign keeps me grounded to know how lucky I am to have my dream job.

My path is a crazy one. I was working in the Oil and Gas industry right out of college and I would drive countless hours through South Texas and Louisiana so I listened to a lot of sports talk radio. In 2002, I entered the “Be Andrew Siciliano For A Day” contest with Tony Bruno’s show on Fox Sports Radio.

Somehow I won that national contest, I flew to LA and hosted their radio show with them for one day.

I fell in love with sports talk radio and once I got back to San Antonio, I went to the local radio station (Ticket 760) and told them I’d take any job. They gave me a phone book, a cubicle and told me to learn how to sell advertising. Best thing that ever happened to me.

I learned the business of sports radio before I learned how to actually host a radio show. Eventually it led to a weekend show, which lead to a weekday show which then lead to a national show on Fox Sports Radio.

When I moved to a larger market in Denver, there wasn’t any opportunities to get on-air, so I took the sales experience that learned and started my own sports radio company.

It was the scariest and hardest thing I’ve ever done, but I knew I could make it. I just needed a shot.

The only way to get that shot was to start my own company and finance it myself.

I owned my own show and content and was able to do the show that I wanted, which made all the difference in the world.

It eventually led to an agent finding me in New York City during Super Bowl 48 and within six months, I was signed.

I then auditioned for ESPN and eventually became the anchor for the SEC Network and a host for ESPN and Sirius/XM Radio.

It’s a dream job that had a really different roadmap.

How does the off-air, pre-show planning work with Chris Doering and Greg McElroy for SEC This Morning and Dari Nowkhah for SEC Now?

My philosophy for content in my shows is a little different.

I want my analysts to have a general idea of what direction we are headed, but I don’t tell them exactly where I’m going.

I want their opinion and our conversations to be fresh.

It just feels so much better when you have a true discussion, rather that just planned questions and canned answers.

My television producers hate it as I often go off script, but I’m from the radio world where’d I rather get genuine answers from the guys rather than something that they prepared.

The good news with my crew is that we all love the SEC, so none of us really ever have to “prep” for shows. We’re already tracking all of the SEC storylines so it’s more about us just coming together and talking like we are having a beer.

What is your read on how much longer Nick Saban will coach Alabama and if Dabo Swinney will succeed him when he retires?

Everyone wants a prediction on how many years Nick Saban will continue to coach Alabama, but it’s a fluid situation.

Saban is going to coach as long as he has the fire to successfully chase perfection. There is going to be a day when Saban, out of respect for the game, is going to wake up and realize that he can no longer do his job at a level that satisfies him.

I don’t think there is a number he’s chasing regarding championships, I think he is always chasing something that can’t be caught – the perfect season. When he feels that he can no longer get close to achieving perfection, he’ll call it a career.

Here’s how I see it going down: Saban likely calls it a career around 2022 and assuming Dabo Swinney is still having Top Five success at Clemson – which I think he will be – Alabama will then make the phone call to Dabo about coming home.

Clemson then will match anything Dabo wants to stay at Clemson.

While Dabo Swinney played at Alabama, “Dabo” is Clemson. That’s his legacy.

The only way I would ever see Dabo at Alabama is him replacing the coach that follows Saban – and even then I think it’s a longshot.