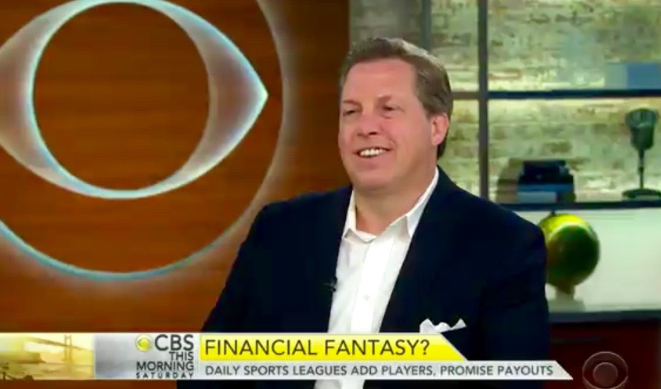 The multi-platform journalist frequently appears as a guest on TV/Radio/Podcasts to discuss sports business, media and marketing news. McCarthy has appeared on everything from CBS This Morning, NBC’s Today, Fox & Friends and Access Hollywood to CNBC, CNN, NPR and the BBC.

Most recently, McCarthy’s scoop that Jay-Z and Roc Nation were teaming up with the NFL was cited by the Wall Street Journal, Variety and too many other outlets to name.

McCarthy has also served as a journalism professor at Rutgers University since 2015. He’s based in New York.

Do you think ESPN President Jimmy Pitaro is trying to erase the perception that ESPN is a liberal-leaning network?

No doubt. That is exactly what Pitaro and Norby Williamson, the powerful shot-caller for all studio and event production, are doing.

First, try to fix a fractured relationship with the NFL that saw ‘Monday Night Football’ get the worst, dog-shit game schedule every year. Second, try to remove ESPN from the center of Red State vs. Blue State Culture Wars dividing the country.

With Jemele Hill now writing for The Atlantic, and Michelle Beadle out at NBA Countdown as you reported first, there’s hardly anybody willing to challenge the No Politics Policy.

Dan Le Batard tried it. And Pitaro immediately called him on the carpet for attacking his ESPN as gutless for failing to stand up to President Donald Trump.

It’s my understanding Pitaro gave Dan a final warning. If he tries it again, Dan could be calling his old ESPN mentors, Jamie Horowitz and John Skipper, at DAZN for a new job.

Even the outspoken Keith Olbermann is tweeting about puppy dogs instead of politics. Both Williamson and Mike Greenberg have told Front Office Sports in interviews that ESPN is going to steer clear of the 2020 Presidential Election as much as they possibly can.

The perception that ESPN is some liberal MSESPN — as Clay Travis would say — is the last thing Pitaro wants, especially heading into the 2020 U.S. Presidential Election.

Bill Simmons wrote ESPN always thought of itself as an escape from the real world for sports fans, that politics was the “invisible third rail” that ESPN avoided at all costs.

It was Jason Whitlock of FS1 who once said ESPN used to have the perfect brand position: it was every sports fan’s best friend.

That’s what Pitaro and Williamson are trying to build again. We’ll see if they can pull it off.

Describe Front Office Sports and what it was about the company that caused you to want to take a job there – and is it fair to say that FOS is embracing a disrupter role in the sports business media industry?

As a sports business reporter for 20 years, I always wanted to work for a start-up.

I had been reading FOS for a long time — when they broke the story of the Alliance of American Football (AAF) filing for Chapter 7 bankruptcy, I went ‘whoah.’ — and so when the opportunity to join the company came along, it was right up my alley.

Here was this feisty, independent company — started and run by hard-driving 20-somethings Adam White and Russ Wilde — beating all the big media companies.  And they covered it in a smart, just-the-facts way that impressed the hell out of me.

This past week, we broke one of the biggest sports biz stories in years: Jay-Z and Roc Nation teaming up with the NFL. This deal will change how the country’s biggest and most popular league operates for years to come. And could result in Jay-Z becoming the league’s first African-American owner.

Exclusive: The NFL poised to go into partnership with Jay-Z's @RocNation. Could be a very smart deal for both sides. Check out our story in @frntofficesport. https://t.co/npP9dJJDsb

Adam and Russ are two of the smartest, hungriest people I’ve ever met. We have an outstanding team with editor Ian Thomas, talented reporters Pat Evans and Ed Moran, social media guru Reesa Lawrence and superstar account guy Joe Londergan. And we’re hiring. That’s something not many companies can say in this god-forsaken media business.

You’re right about FRONT OFFICE SPORTS being the disruptor. Last week’s Jay-Z/NFL story shows how we punch above our weight.

As Chiat/Day advertising genius Lee Clow used to tell me during my Adweek days: It’s always better to be the Pirates than the Navy. We’re the Pirates.

Who is the most talented on-air sports media personality under 40 – and why?

Damn. This is a tough question. So much young sports talent out there, it’s crazy. I’ll try to organize my answers this way.

ANALYSTS/ANNOUNCERS: Tony Romo, 39, leads the list. Entering his third season behind the mic for CBS Sports, he’s the hottest analyst in sports. Ryan Ruocco of YES Network and DAZN showed he has the chops to do anything while filling in for Michael Kay. He’s coming on. Nate Burleson of CBS Sports/NFL Network will be the next Michael Strahan: a talent who moves seamlessly between sports and entertainment, then back again.

HOSTS/REPORTERS: Josina Anderson of ESPN is the total package. I can see her doing anything in the future, including serving as a Monday Night Football analyst if Booger McFarland doesn’t work out. Rob Perez of Action Network has carved out a funny, absolutely unique niche. Maria Taylor and Laura Rutledge have great chemistry with Mike Greenberg on ESPN’s Get Up. Cassidy Hubbarth, Mina Kimes, Ryan Clark, Michele Steele, Molly Qerim and Sarah Spain at ESPN have nothing but upside. FS1 is extremely high on Jenny Taft. She’s ultra-versatile. Peter Schrager of NFL Network/Fox Sports is coming on like gangbusters. Big Cat (Dan Katz) and PFT Commenter (Eric Sollenberger) of Barstool Sports are poised to break out big time. Ex-ESPNer Sarina Morales killed it in her first year with the Los Angeles Rams. Look for big things from her this season.

INSIDERS: Ian Rapoport of NFL Network is the next Adam Schefter. Look out for Chris Haynes and Seerat Sohi of Yahoo. They’re two of the best in the business at covering NBA.  Plus, I’m seeing Haynes a lot on FS1. ESPN will regret letting him get away if they haven’t already.