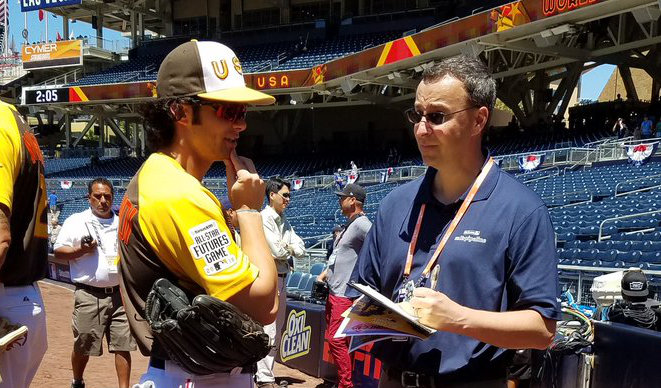 University of Georgia graduate Jim Callis, who is baseball’s top expert on prospects and the MLB Draft, started working at BASEBALL AMERICA in December, 1988, where he covered prospects and the Draft for the better part of 25 years – excepting a three-year stint at STATS, Inc..

In September, 2013, Jim moved to MLB.com and MLB Pipeline as a prospects and Draft expert.

In the ensuing six years, he has also become a regular contributor to MLB Network, serving as an analyst for the league’s Draft coverage while also appearing as a color commentator during college, high school and prospect-related games aired on the baseball network.

Describe your personal, professional journey from your days as Sports Editor of THE RED & BLACK student newspaper at the University of Georgia in the 1980s to MLB.com Draft/prospect expert and MLB Network on-air contributor in 2019.

I always feel very fortunate to have been in the right place at the right time.

The first year I covered baseball for The Red & Black at Georgia was 1987 — which just so happened to be the first year the Bulldogs ever went to the College World Series.

They had three future big leaguers, including two first-round picks, and I had great access as really the only writer covering the team on a regular basis for any outlet.

I remember meeting then-Twins scouting director Terry Ryan in the stands at Foley Field, a contact that came in handy in future years.

That whole year solidified the fact that I wanted to cover baseball for a living.

Covering that team led to me writing a short article for Baseball America in 1988 on how Georgia was rebuilding its pitching staff after the two first-round picks (Derek Lilliquist and Cris Carpenter) departed.

That in turn led to me getting an internship with BA — my big responsibility that summer was typing all of the names of every player ever drafted into computer files for a draft book — and that led to a full-time job.

I turned in my last paper at Georgia in December 1988 and drove to the Winter Meetings in Atlanta.

At the time, the traditional path into sports writing was working on the desk for the local paper, maybe get a few bylines covering high school sports and hoping for an eventual opportunity to do more.

There was no Internet, no blogs, no way to self-publish if you didn’t have a chance to write.

At BA, I think we had four full-time editorial employees at the time, so I got to do everything from writing to editing to tracking down photos to designing layouts.

In my early 20s, I was covering the Olympics, going to Cuba for the Pan Am Games, covering the College World Series (still my favorite event) every year, doing prospect coverage and writing a ton — which was great, because you get better at writing by writing.

Allan Simpson built a magazine that was so well respected within the industry that literally anyone in baseball would return your call if they knew you were with Baseball America.

I eventually rose to managing editor at Baseball America but left BA in September, 1997, because my wife and our two young kids wanted to move to the Chicago area — and back then it wasn’t as viable to work offsite.

So I spent three years at STATS Inc. working in their now-defunct publications division and cranking out a lot of books while working on some other projects.

BA asked me in May, 2000, if I wanted to come back and work for them from home, and I was excited to get back into more reporting.

I’ve been fortunate to work from home since 2000, which was great while raising four kids (the youngest of whom just graduated from high school). I’d still be at BA, where I loved working, but in 2013 MLB.com made me an offer I basically couldn’t refuse to keep doing what I love doing, which is covering prospects and the Draft.

What skills are currently prioritized when it comes to prospect evaluation by MLB scouts and how have those priorities changed in the four decades you’ve covered baseball?

Physical ability obviously still matters, but the evaluation of players has changed tremendously in the three decades I have covered baseball.

When I started, I do think teams were aware to some extent of how college players performed, but statistics weren’t readily available (there was no Internet) and there were multiple examples of players whose numbers should have raised red flags but were still high picks.

At that time, there wasn’t anything close to spin rates or exit velocities or extension that could be tracked.

After Moneyball came out, a number of clubs followed that example and started putting more emphasis on how players actually performed.

The college summer leagues all use wood bats now, so there’s a lot of viable data there.

The high school showcase is much, much more extensive than it used to be and so there’s a lot more useful performance data of the best high school players facing the best competition.

And now we’re in an era where teams are concerned with not just a player’s performance but also what sparks that performance.

Now there’s extensive Trackman data available from colleges and high school showcases, so clubs are digging into that.

The tools still matter, but now teams want to know how well those tools translate to the professional game.

Behind closed doors, what do Major League Baseball front office employees and scouts really say about how college baseball programs are operated – and vice versa. Is there mutual respect? Animosity? How has the relationship between college and pro baseball changed in the years you’ve covered the sport?

In my first year at Baseball America, I did a huge package of stories on the relationship between MLB teams and college programs.

Front-office officials and scouts, in general, felt that a lot of college coaches overused pitchers and emphasized winning much more than development.

The consensus among MLB clubs was that if they didn’t sign players out of high school, they might get hurt or developed improperly in college.

The quality of college baseball competition and facilities has improved drastically, and you’re seeing MLB clubs hire college coaches — look at the Twins and pitching coach Wes Johnson, for one example.

You don’t hear nearly as many complaints about pitcher overuse as you used to (and to be fair, you had pro teams blowing out pitchers in the minor leagues at the same time back then).

MLB teams would still rather get their hands on players out of high school, but there’s not as much trepidation as what might happen if they go to college. Both sides work to help each other a lot more than they used to.