SHOOTING THE 3: JAY CRAWFORD OF WKYC-TV IN CLEVELAND 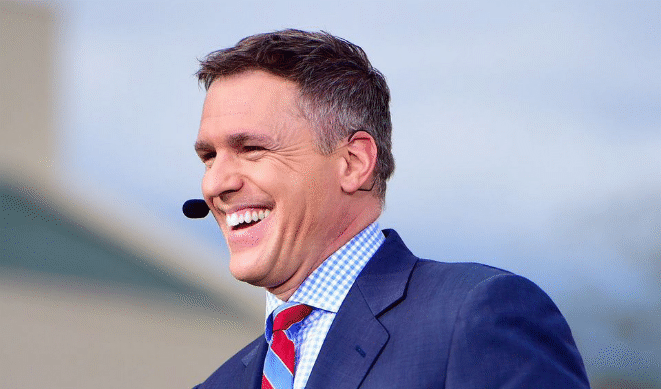 Jay Crawford: Back Home In Cleveland And Loving It

In 2003 Crawford made the jump to ESPN and over the next 15 years was as high profile an on-air talent as there was at the venerable sports network, launching groundbreaking shows like Cold Pizza and First Take while also piloting innumerable episodes of the network’s flagship SportsCenter.

2019 finds Crawford embarking on a new chapter in his life – as an on-air contributor and future news anchor at WKYC-TV in his beloved hometown of Cleveland.

Describe your personal and professional life since you departed ESPN.

In a word: Chill.

It’s been both a blessing and a curse.

Because I had 2 1/2 years left on my contract, I was owed a sum of money I was not going to leave on the table.

It would have been financially punitive to walk away from the contract and I couldn’t imagine rewarding them with relief for their decision to end a mutually agreed upon deal. So, I entered a practice retirement phase.

I golfed, I traveled, I helped plan my daughter’s wedding, and most importantly, I relocated from Connecticut back to my homeland, Ohio.

I had planned to do this as soon as my contract expired, the layoffs just gave me a two-year head start.

ESPN did grant permission for me to do a number of freelance projects which included hosting the Super Bowl shows for the New England Patriots Network from Minneapolis as well as doing Cleveland Browns play-by-play for their preseason games both last year and this.

I also got a cool call from Ice Cube while vacationing at Disney in April. He wanted to know if I could host the live Big 3 draft show on CBS Sportsnet.

You don’t tell Cube no. I had a blast with that.

I also did an executive in residence at my Alma Mater Bowling Green State University in the academic year 2017.

I flew in one week a month and I really enjoyed my time there.

But finally, my contract expires at the end of July and I get to start with my new employer, WKYC-TV, NBC Cleveland next month.

I will be launching a new 5pm show at the start of 2020 and can’t wait to get started!

ESPN certainly has gone through a tumultuous time since you exited, what are your thoughts on what has happened at the network since you left?

I am completely unqualified to speak of the on-air product because – with the exception of an occasional game here and there – I haven’t watched.

When I tell people that, the immediate assumption is … you salty?

It always makes me chuckle.

How could I be salty with a company that paid me for 2 1/2 years to stay home?

I have no bitterness at all. In fact, I’m grateful.

It was 13 terrific years of hosting Cold Pizza, First Take, SportsCenter and eventually SportsCenter on the Road.

To be blunt though, I hated my final assignment there. (SportsCenter on the Road.)

I never would’ve lasted 2 1/2 more years in that role. I had grown increasingly frustrated with the new direction of SportsCenter and really just needed an escape plan. The layoffs saved me from all of it.

Describe your own, ongoing athletic career!

Brooks, I’m the guy that refuses to quit.

I absolutely love the game of baseball. Always have.

When I was five years old my parents bought me a full baseball uniform – the thick wool pants and jersey.

It was my pride and joy.

Throughout the summer I basically lived in the uniform. I have pictures of family camping vacations in July with me in full game gear, including the stirrup socks.

I took it off at bedtime, when I would wear baseball-themed pajamas, and miraculously the uniform was always washed, dried and neatly folded the next morning waiting for another day of wear. Mom was awesome!!!

Family friends and strangers were no doubt like, ‘what’s up with Bobby baseball?’ But I didn’t care.

I wore that thing until it no longer fit. That’s the easiest way to explain why, at 54, I still love putting on a uniform and playing baseball more than anything else.

It also explains why, after three ACL replacement surgeries on my left knee, two surgeries on my right knee, and a surgery to repair a torn labrum and biceps tendon in my right shoulder, I still play baseball.

I usually play in a national tournament each fall in Arizona as well as the greater Cleveland league.

I’ve changed the way I pitch post-surgery using a heavy diet of cutter, curveball and slider while mixing in two- and four-seam fastballs.

My last outing was a complete game 4-3 win with 10 k’s. (I still love to hit too and was more proud of my two-run, two-out triple to give us the 4-3 lead in the bottom of the eighth inning.)

I was lucky enough to pitch in a handful of minor leagues games and I recently ran into my last pitching coach who reminded me of my last outing, which was two hitless innings.

I love to play, and hope to continue playing as long as my body allows.