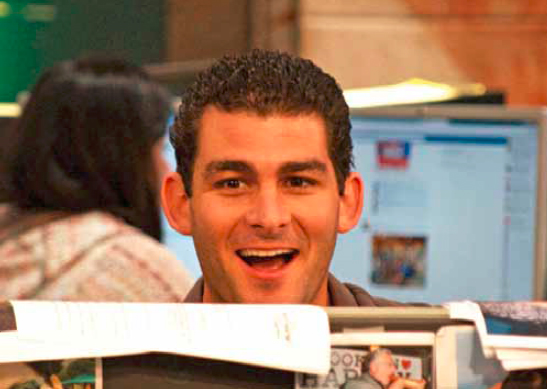 Evan Rosenblum oversees one of the most important sports media outlets in the industry – TMZ Sports.

Began as an outcropping of Harvey Levin‘s media powerhouse TMZ, TMZ Sports was built from the ground up by Rosenblum, who as current Executive Producer and on-air host has effectively transformed the outlet into an acknowledged leader in the sports journalism field and sports media’s most consistent breaking news machine.

Rosenblum first began working for TMZ company founder Levin as a writer on the newsmagazine show “Celebrity Justice” and later reconnected with Harvey during the early stages of TMZ.com.

Throughout his time at the company, Evan has also played a key role in the development of TMZ.com and “TMZ on TV” – while managing a newsroom that has broken some of the biggest stories in entertainment and sports – from Ray Rice and Donald Sterling to the death of Michael Jackson.

How did TMZ Sports originally come about?

Our photogs were shooting a lot of athletes out in Hollywood and on the whole, they were a lot more fun than the traditional Hollywood celebrities we were getting.

Big personalities, unafraid to give strong opinions on hot topics.

And as we decided to focus our energy on Sports, we quickly realized our news machine was capable of getting big stories other media outlets just couldn’t touch.

Busy from start to finish. TMZ has a big newsroom and we share a lot of resources but we have a handful of dedicated TMZ Sports reporters including Michael Babcock, Van Lathan, Lucas Widman and Edward Lewis who I believe are some of the best reporters in the space.

We’re constantly on the hunt for leads, talking with sources and looking for interesting stories.

We shoot three day-of-air shows straight out of newsroom (TMZ, TMZ Live and TMZ Sports on FS1) so it’s little hectic in here, but we’re still publishing between 13 and 18 stories a day on the website.

Our site plays to the public and it and we feel it has really resonated — and not just with sports fans.

I will say it’s gratifying when you break a huge story like Donald Sterling and within hours President Obama is commenting about it and crediting us.

Ultimately, yeah, I feel we’ve connected and were still growing.