When he was 59 years old – with no connection to the state of Alabama other than having won a national championship as the head football coach of the state’s flagship university, Nick Saban was granted a statue by the University of Alabama.

When last week began, thanks to five national championships in 12 seasons as the head coach of the Crimson Tide, no college football coach enjoyed a more pristine, enviable reputation inside and outside the state of Alabama than Nick Saban,

But then Saban decided to recount the reasons behind Alabama’s disastrous defeat at the hands of Clemson in last season’s National Championship Game on the SEC Network’s SEC NOW program last Wednesday.

“When the season started, I think we were great. When we won the LSU game, it just seemed like people’s own agendas starting to become more important,” Saban said.

Asked by the SEC Network’s Paul Finebaum to identify the “people” he was referring to, Saban promptly, uncharacteristically and astonishingly launched into a torrent of finger-pointing and character assassination directed at his own coaching staff.

“Coaching. We had a lot of guys who wanted to be head coaches at different places. It takes a special person to stay focused on what they have to do now when they have a job somewhere else that’s awaiting them and they have a responsibility on staffs.

” … we had a lot of that on our staff last year, and I think those relationships with players go a long way to keeping players where they need to be to do the things they need to do – continue to prepare, practice the way they need to practice so that they can continue to improve and get better, and we just didn’t do that very well at the end of last year.”

The only Alabama assistant coach on Saban’s 2018 staff who ascended to a head coaching position elsewhere following the Clemson debacle was Mike Locksley, who is the new head football coach at the University of Maryland. 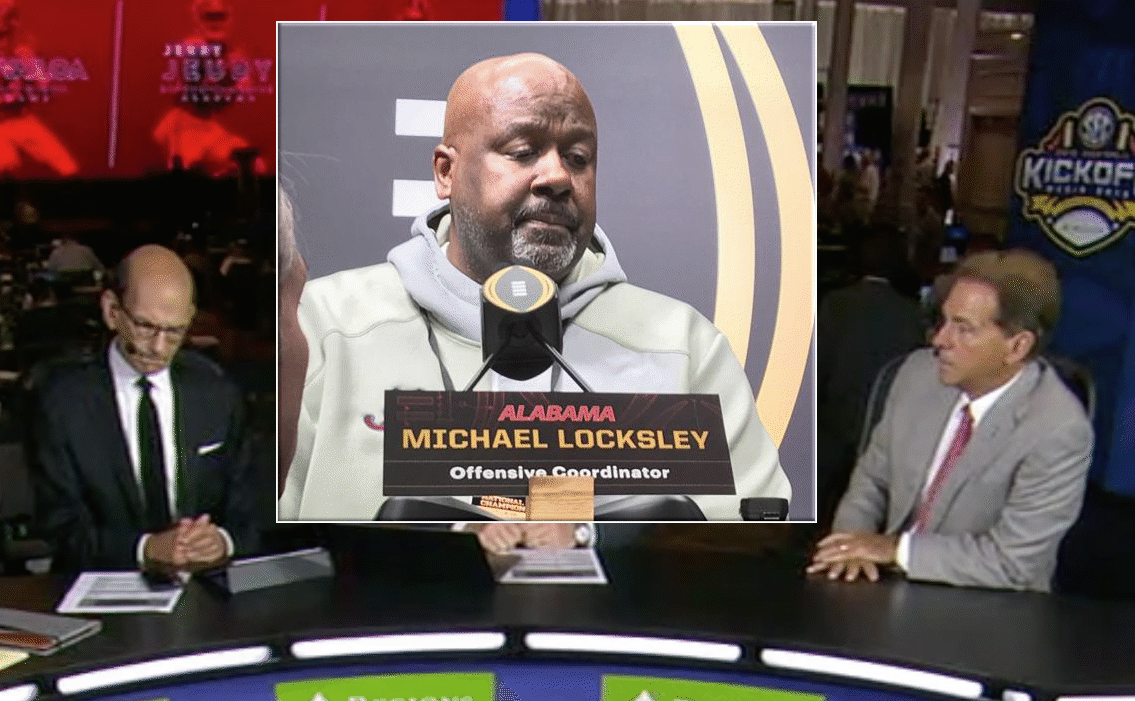 Did Saban Actually Blame Broyles Award-Winning Alabama Assistant Locksley For Tide’s Embarrassing Loss To Clemson? Sure Seems Like It

Informed of Saban’s remarks, Locksley responded to Emily Giambalvo of the WASHINGTON POST, who Tweeted out his comments while providing context:

Mike Locksley said he has talked with people at Alabama and is “assured that comment was not directed at me.“

“I know this, why wouldn’t I want to win the national championship to springboard my time here at Maryland?”

Locksley: “I can sleep at night knowing we did a great job. We broke records there on offense. We gave ourselves a chance to win except one game, which I understand the expectation at Alabama is to win championships and we picked the national championship to not execute well.”

Locksley was the only coach on that staff who became a head coach, but he said there were “quite a few guys on our staff at Alabama that had opportunities to interview for head-coaching jobs.”

Michael Casagrande of AL.com reported last week on the myriad assistant coaches on the 2018 Alabama staff who have since moved on.

Offensive coordinator Mike Locksley was the only assistant who took a head coaching job at Maryland. Positional coaches Dan Enos and Josh Gattis took offensive coordinator jobs at Miami and Michigan, respectively immediately after the championship game loss to Clemson.

In the same article, Casagrande republished a March 26, 2019, quote from Saban that, in the Alabama head coach’s reference to “good recruiters” who supposedly lacked on-field teaching skills, might have been a reference to the recently-departed Locksley.

Back in March during spring practices, Saban explained some of the differences between the 2018 coaching staff and the new group.

“I think that — no disrespect to the coaches that we had here before,” Saban said March 26. “I thought they did a wonderful job. I think there were a couple of areas where we had a limited amount of experience, and I think that we’ve been able to improve the staff in a lot of ways with the people that we have and the experience that they have.

“I thought we needed to improve our staff as a recruiting staff a year ago. I think we did that. I think this recruiting class probably showed that. I think that the guys that we hired are good recruiters, but I do think in some cases we have more experience and I think knowledge and experience is always something that is really beneficial to teach players.”

Regardless of his intended target(s), what makes Saban’s overt criticism of his assistant coaches truly significant isn’t so much the content of his remarks, but that he did it in the first place.

Such an uncharacteristic gesture by a coach with five national championships in his pocket and enough goodwill to last several lifetimes can’t help but make one wonder if such an extraordinary event might be an early sign that the beginning of the end of the Saban-Alabama football dynasty is nigh.