In the immediate aftermath of a SportsbyBrooks.com exclusive report uncovering the connection between Silicon Valley venture capitalist Christopher Schaepe and college admissions scandal kingpin Rick Singer, Connie Loizos of Techcrunch.com reported today that Schaepe is out at the firm he co-founded 19 years ago, Lightspeed Venture Partners. 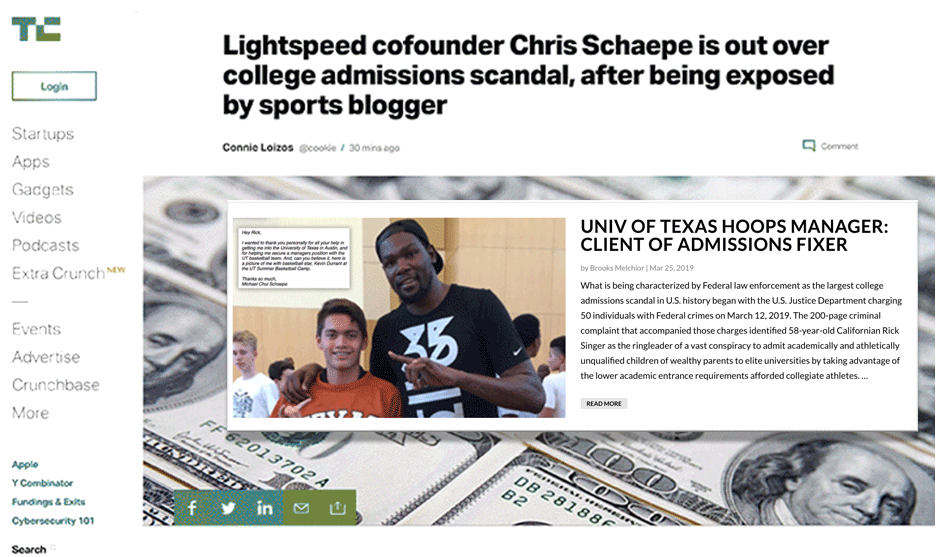 Sources say that soon after the admissions scandal broke, Schaepe hired a lawyer, then told Lightspeed, which made the decision to part ways with him. But seemingly, a sports blogger named Brooks Melchior played his own role in the news and why it burst into public view today.

As Melchior noted in a post on Monday, Center, the tennis coach, was heard on an FBI wiretap confirming to Singer that he had received nearly $100,000 “in exchange for which [he] would designate a student as a recruit to the (UT) tennis team, thereby facilitating his admission to (UT).”

Center has since been fired, but Melchior noted that the parent in the case involving Center was neither named nor indicted, so Melchior did some digging. What he found: a screenshot of Singer’s now-deleted website that happened to feature a picture of Schaepe’s son, front and center, alongside NBA star Kevin Durant and a testimonial. …

Lightspeed Partner Chris Schaepe recently made the firm aware of a personal matter. We determined to separate from Chris to ensure this matter does not interfere with firm operations. The matter does not involve the firm, its personnel or its portfolio companies.

In another statement through the website Axios.com, Schaepe is credited with having made the following statement about college admissions scandal kingpin Rick Singer:

We are deeply disturbed that the person we had trusted to guide us through the college application process was engaged in inappropriate acts. Like countless other families, we believed that his services and his foundation were all above board, and we are shocked by his deception. 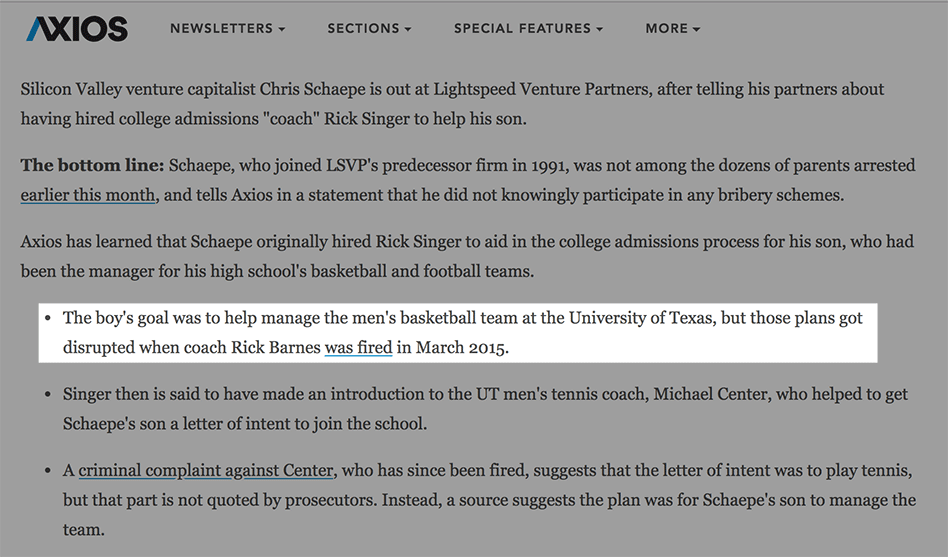 Axios has learned that Schaepe originally hired Rick Singer to aid in the college admissions process for his son, who had been the manager for his high school’s basketball and football teams.

As part of the report that contributed to Schaepe’s ouster, SportsbyBrooks.com documented that Schaepe’s son Michael Chiu-Schaepe was in fact listed as a manager in the media guide for the 2015-16 University of Texas basketball team and that the testimonial seen on Singer’s website from Chiu-Schaepe cited his appreciation of Singer, “for helping me secure a managers position with the UT basketball team.“ 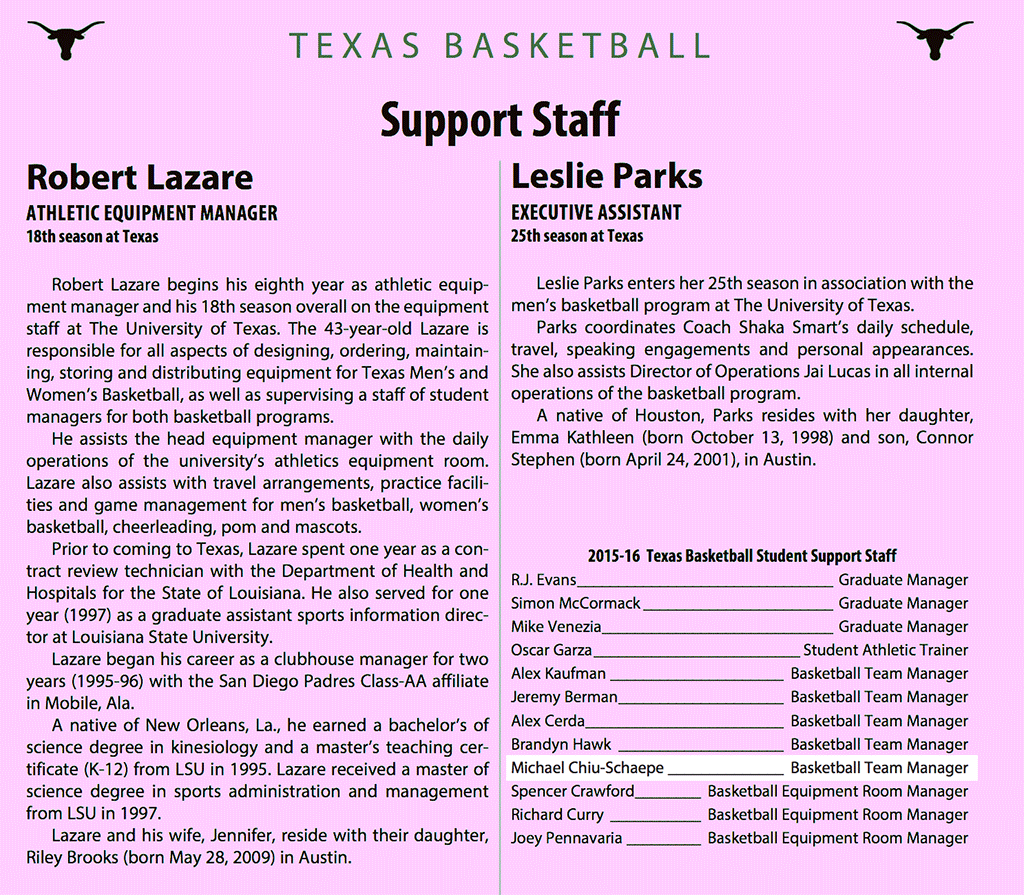 But the Federal complaint involving Schaepe, his son and the University of Texas only mentions how UT Tennis Coach Michael Center assisted Singer in providing Chiu-Schaepe admittance into the school. 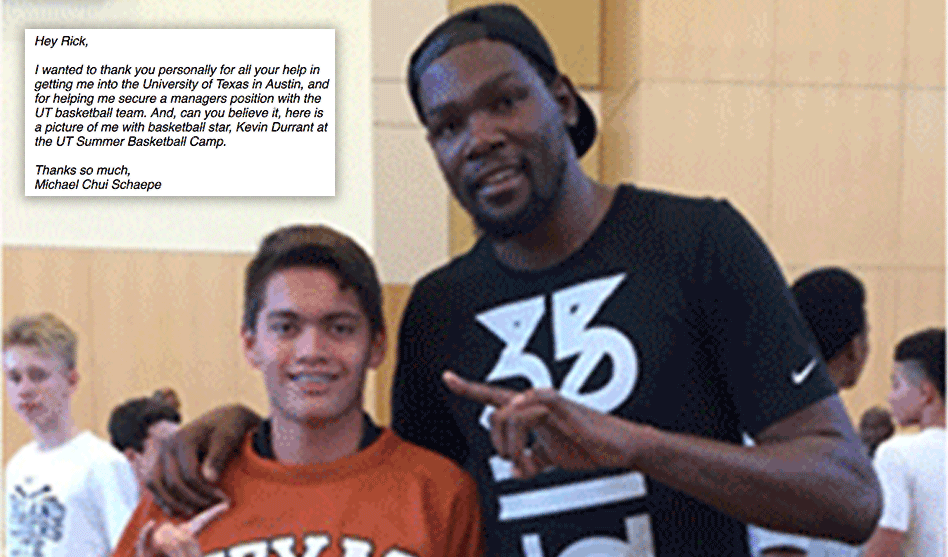 The addition of the firing of Rick Barnes in 2015 goes a long way to explaining why Michael Chiu-Schaepe’s role with the Texas basketball team wasn’t mentioned in the Federal complaint documenting the alleged crimes of Texas tennis coach Michael Center and why Chiu-Schaepe’s testimonial on Singer’s website doesn’t mention tennis.

It also suggests that Barnes and/or a representative of the Texas basketball program may have played a role in Chiu-Schaepe’s acceptance into the University of Texas – which may also be related to the University of Texas “Longhorn Foundation” website crediting the “Chiu-Schaepe Family Endowment” with providing “scholarship support” for the Texas basketball program, though the page linked to the family name is blank. 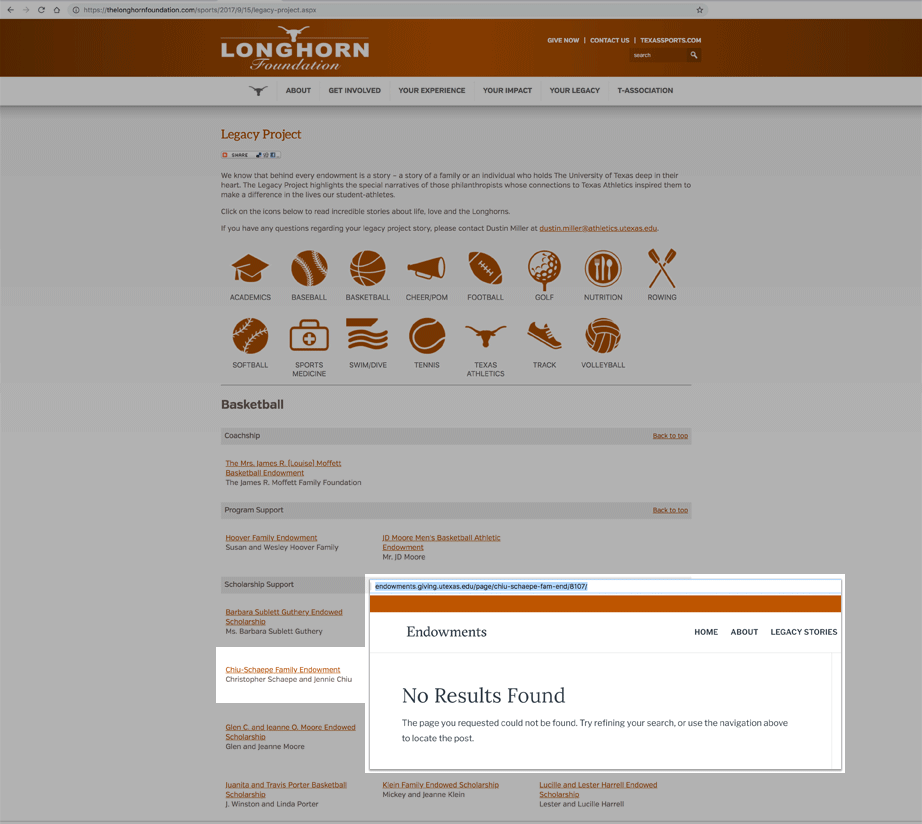 As reported by SportsbyBrooks.com last week, the Chiu-Schaepe family is also listed by the University of Texas as having made a $100,000 donation to UT’s Moody College of Communication. 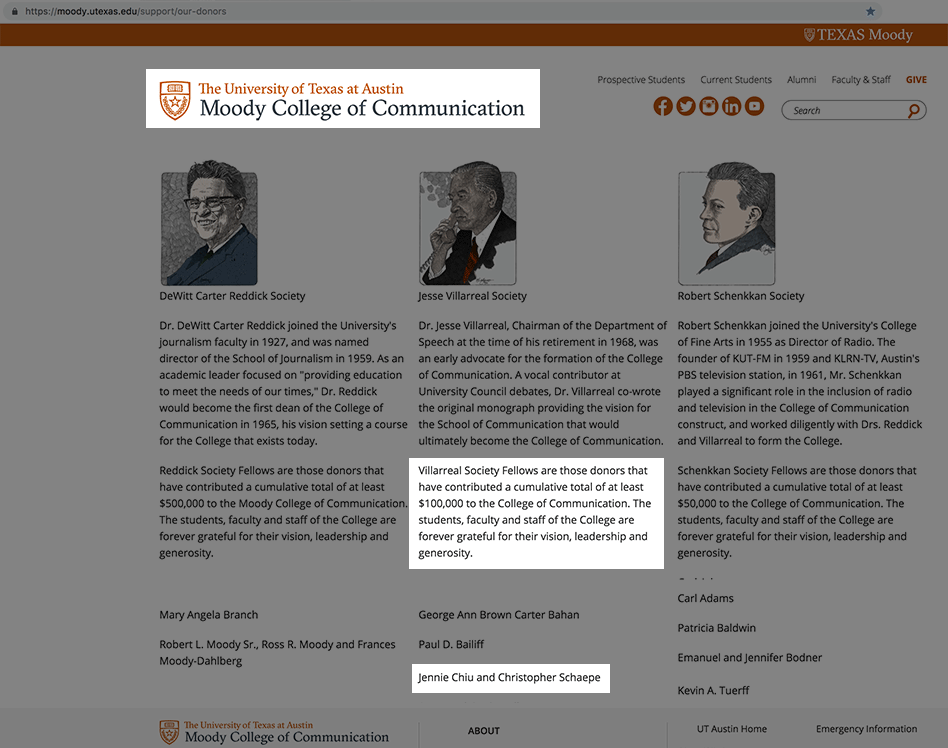 In reporting the news of the charges against the Texas tennis coach whose alleged crimes provided Schaepe’s son admission into the University of Texas, the DAILY TEXAN reported last week:

Those within the University investigating the incident believe it is isolated and does not involve any other employees.

The fact that the University of Texas is still crediting Christopher Schaepe with having made a donation to the school’s basketball program while recording on another of its websites that Schaepe and his wife are $100,000 donors to UT’s Moody College of Communication and that Singer’s plan for Chiu-Schaepe getting in to Texas originally included the cooperation of Rick Barnes – with Chiu-Schaepe listed as a manager for the team that season – all but confirms that the criminal activities that got a University of Texas employee arrested by the Feds was not an isolated incident involving a single UT tennis coach.