On Friday the University of Arizona football program will stage its annual NFL pro day in Tucson. Among the newest draft-eligible, ex-Wildcat football players performing for NFL scouts will be the starting punter for Arizona last season, Dylan Klumph. (Pronounced “Klump.”) 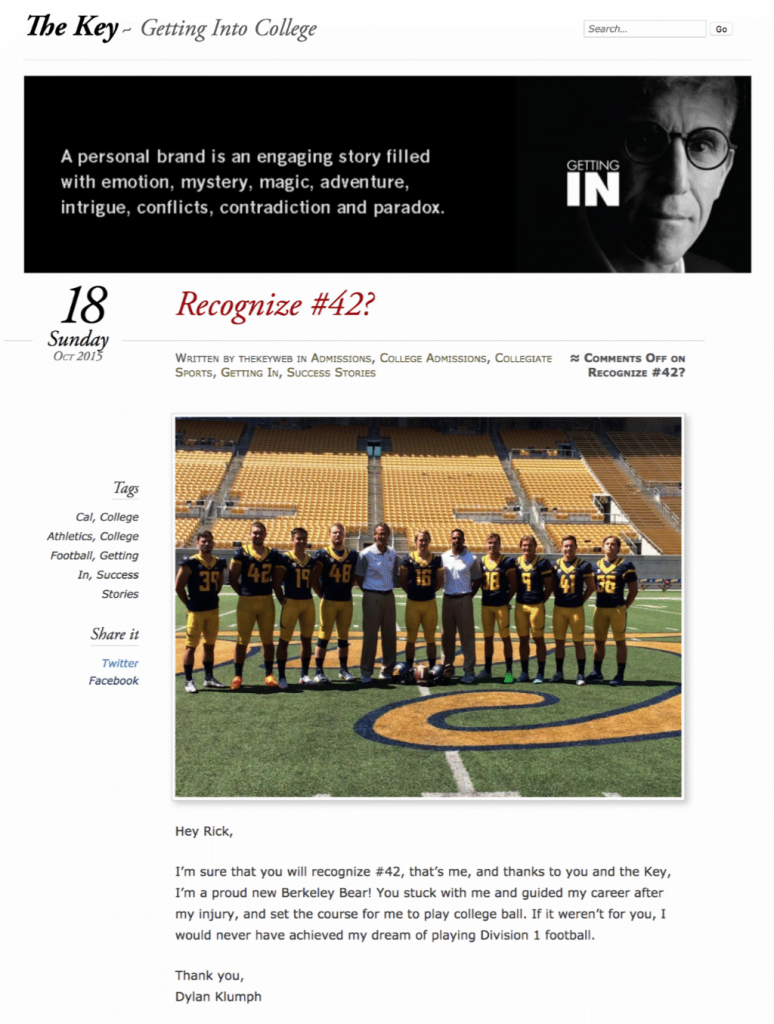 Though Klumph, like the rest of his Arizona teammates following the 2018 season, failed to land an invite to the NFL Combine in Indianapolis, he is by no means an unknown quantity to NFL scouts. Before joining the Arizona football team as a graduate transfer, Klumph was a two-year starter at punter for the California Golden Bears.

Tuesday, the U.S. Justice Department reported that, “a nationwide conspiracy that facilitated cheating on college entrance exams and the admission of students to elite universities as purported athletic recruits,” had been uncovered and that the now-admitted ringleader of the conspiracy was, “William ‘Rick’ Singer, 58, of Newport Beach, Calif.”

Since that announcement, Sports by Brooks has been investigating the myriad web and social sites that Singer used to promote and execute his fraudulent enterprise.

During our investigation, which is ongoing, we have discovered dozens of purported testimonials on Singer-run sites from  clients who supposedly employed Singer’s services. Among those alleged testimonials was one purported to be from Klumph.

In it Klumph is seen in a photo wearing a Cal football jersey while joined by some of his Golden Bear teammates. Accompanying the photo is text that reads:

I’m sure that you will recognize #42. That’s me, and thanks to you and the Key, I’m a proud new Berkeley Bear! You stuck with me and guided my career after my injury, and set the course for me to play college ball. If it weren’t for you, I would have never achieved my dream of playing Division 1 Football.

If Klumph did provide such a public, glowing tribute to Singer, that doesn’t change the fact that in his first year as the starting punter for the Golden Bears, Klumph was second in the Pac-12 in average yards-per-punt and though his last two years, one at Cal and one at Arizona, weren’t as statistically impressive, Klumph remained an above-average punter who, with a little luck and perseverance, may well find himself on an NFL roster at some point in the future.

Klumph’s decision to make the move from Cal to Arizona as a graduate transfer was reportedly – though not confirmed to our knowledge by Klumph on the record – due to possible increased competition for playing time from another Cal punter, Stephen Countts.

Klumph did express on the record that moving to a school with a more favorable climate as it related to his position on the field and working with Arizona specials teams coach Jeremy Springer, who coached two NFL punters as an assistant at Texas A&M, were major factors that attracted him to the Wildcat program.

Klumph also reportedly – though not on the record – mentioned that the Cal coaching staff at one point attempted to block him from contacting other schools about a possible transfer.

Lastly though not insignificantly, for Klumph to have finished out his career as a Golden Bear, he would have had to have been accepted to a Cal graduate school that maintains Ivy League-level entrance requirements.

While Klumph’s college football experience was in no way unusual, the same can’t be said for the method that ultimately produced a three-year starter at a Power 5 Conference.

Certainly Klumph’s football career at Crespi High School in Los Angeles gave no indication of what was to come considering that while on the school’s varsity, Klumph punted a grand total of six times,

But then, someone showed up in Klumph’s life who would change everything – a man named Chris Sailer.

Through his punting and kicking camps, Sailer has established himself as one of the foremost authorities on high school and college-age kicking talent in the United States.

Sailer’s reputation is such that, upon his blessing, it is all but impossible for punter or kicker not to be offered a scholarship to play football in college.

Klumph’s transformation from high school afterthought to a three-year starter in a Power 5 conference started when he began attending Sailer’s camps in 2014.

After initially showing Sailer that he had the raw talent necessary to earn a major college football scholarship – Klumph spent a year as a starting punter at Golden West Junior College in Huntington Beach, Calif..

Shortly thereafter, Sailer declared Klumph the “No. 6 punter in the nation,“

Sufficiently impressed by the punter whisperer’s blessing, then-Cal Coach Sonny Dykes signed off on a scholarship for Klumph.

Why then, the testimonial from Klumph to admitted college admissions fixer Rick Singer?

The following transcript from an FBI wiretap of Singer may – or may not – provide a hint:

On or about August 22, 2018, CW-1 (Rick Singer) left McGLASHAN (Singer Client) a voicemail message explaining, in substance, that CW-1 (Rick Singer) would create a fake football profile using Photoshop software, which would allow McGLASHAN’s son to be admitted as a purported football recruit.

“Hey Bill, so we’re gonna– met with [USC], because the [high school your son attends] does not have a football team, I’m gonna make him a kicker/punter and they’re gonna walk him through with football, and I’ll get a picture and figure out how to Photoshop and stuff, so it looks like it and the guy who runs the biggest kicking camp is a good friend, so we’ll put a bunch of stuff about that on his profile, and we should be in pretty good shape to get that done. It’s just a matter of, when I get the profile done, get it to them and figure out when they’re gonna have a sub-committee meeting, so I’ll let you know. Stanford said no, too tough, grades too low, just don’t want to make that an exception right now for him. So I wanted you to know that as well, and then I think I’m seeing you next Tuesday, so if there’s anything you need from me just let me know. See ya. Bye-bye.”