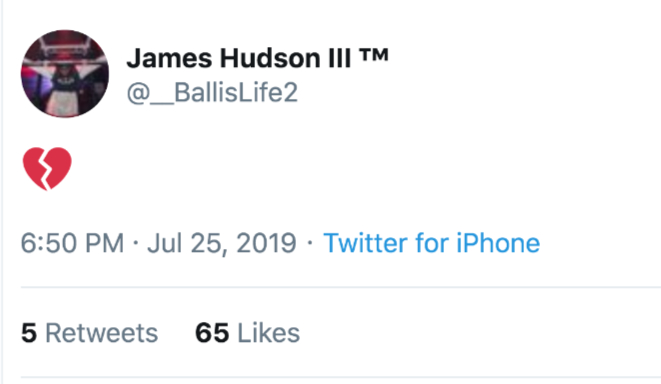 Same as the guy who tells his boss he is not as dumb as he looks, or says a more successful rival football coach was a phenomenal winner but a magnet for controversy, Jim Harbaugh is a master of the backhanded observation.

For instance, the Michigan coach suggested at Big Ten media days that athletes should be able to transfer without restrictions because maybe then they would stop lying about being depressed.

It was a clear and reckless shot at Toledo native James Hudson — the former Wolverines lineman who transferred to Cincinnati late last season — and a curious bit of hypocrisy, leaving us with the same response as Hudson himself.

“LOL,” he posted on Twitter earlier this month after Harbaugh said every athlete ought to have “a one-time ability to transfer and not have to sit out a year.”

In the case of Hudson, Harbaugh did nothing to support his petition for immediate eligibility, then implied Hudson misled the NCAA about his mental welfare in order to obtain a hardship waiver — the kind of skepticism that too often keeps the demons of those bred to show no weakness in the shadows.

I bring this back up, because Hudson announced Saturday his final appeal for eligibility was denied.

“Thank you everybody for your support,“ he tweeted, withholding further comment when contacted by The Blade. “Unfortunately, things did not work out, but this is not the end. … Everything happens for a reason. Until next year.

If the rejection was expected, it was no less of a farce.

And if the NCAA and its member schools have any shame, it should be the tipping point for a new way.

I mean, what more do we need?

Since Harbaugh took, as Briggs wrote, “a clear and reckless shot at Toledo native James Hudson” by implying Hudson was faking mental illness, various University of Michigan-affiliated individuals have defended the coach’s apparent ability to diagnose whether or not someone was clinically depressed.

But in what is anything but a coincidence, all of Harbaugh’s defenders, including brother John, have not talked to Hudson’s mom Glenda.

Last week Glenda Hudson, who reportedly holds a masters degree in counseling, told WTOL-CBS that she and her son James met with Harbaugh in 2018 – before James had decided to transfer – to discuss the then-Michigan player’s mental health condition.

More from the WTOL-CBS report:

Glenda said her son was never given the opportunity to disclose the depression he was feeling.

“I started the meeting out saying ‘Coach, I’m here to find out what it is we need to do about my son,” Glenda Hudson said. “The exact words that I say to Coach Harbaugh: ‘My son is feeling down, disheartened, something’s wrong.’ Coach Harbaugh repeats those words right back to me. (Harbaugh says) ‘James, do you want to leave? If you want to leave, there’s nothing I can do.’ Coach Warinner comes and tries to talk to my son, Coach Harbaugh: ‘Shh..don’t say nothing,’” Glenda said.

On Saturday, the University of Cincinnati confirmed that the NCAA had – for a second time – ruled to bar Hudson from playing football for the Bearcats this season.

We are extremely disappointed in the NCAA’s decision and remain steadfast in our unequivocal support of James Hudson. The mental health of all SAs should be paramount in our decision making. We continue to take proactive steps @uofcincy to remain at the front of this movement. https://t.co/FEyqn1emk7

In a Tweet, Cincinnati Athletic Director Mike Bohn wrote of the ruling:

We are extremely disappointed in the NCAA’s decision and remain steadfast in our unequivocal support of James Hudson. The mental health of all SAs should be paramount in our decision making. We continue to take proactive steps @uofcincy to remain at the front of this movement.

Why did college football’s governing body decide to once again block Hudson from taking the field for UC this season?

Thank you everybody for your support. Unfortunately, things did not work out but this is not the end. Yes, it is unfair and not right but everything happens for a reason. Until next year 🏴

In a Tweet Hudson sent out in the immediate aftermath of the NCAA’s first ruling against him last May, the reason was revealed:

My NCAA waiver got denied. Clearly mental well being isn’t as important as playing time. The stigma is REAL.

The University of Cincinnati filed a waiver for me to be immediately eligible. The NCAA has denied my waiver specifically because I never spoke up about my mental struggles to administration at the University of Michigan.

Like many football players I was afraid to speak up about my depression not wanting to look weak. Now the NCAA is telling me that my courage to step forward and speak about my issues was done too late and subjectively my, “Circumstances do not warrant relief.” 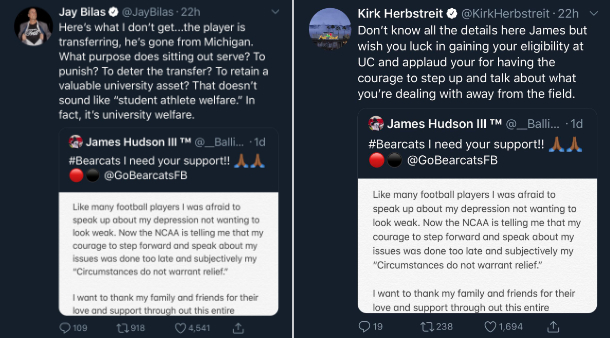 By ruling in what was essentially Michigan’s favor in the case, the NCAA provided irrefutable proof that it is nothing more than an empty storefront existing only as a fraudulent pretense to justify the theft of untold millions from compensation-free players by football factories masquerading as bastions of higher education.