A catastrophic-looking injury suffered by transcendent 18-year-old NBA prospect Zion Williamson during a college basketball game at Duke University on Wednesday – which turned out to be no more than a sprained knee – nonetheless succeeded in re-igniting a nationwide postgame debate about whether or not the NBA should lift its longstanding ban on 18-year-olds playing in the league. 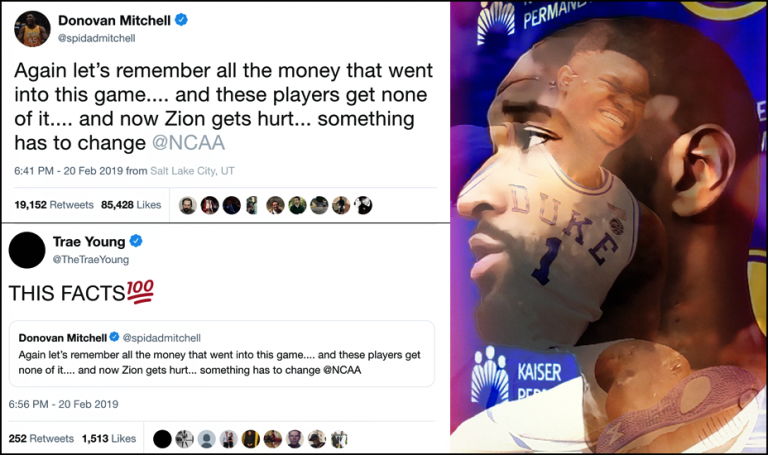 NBA players themselves were part of that public back-and-forth, which included Twitter-enabled complaints from Isaiah Thomas of the Denver Nuggets, Donovan Mitchell of the Utah Jazz and Trae Young of the Atlanta Hawks.

On Thursday, ex-University of Kentucky star and current Golden State Warrior DeMarcus Cousins took those concerns a step further in an expletive-laced dissertation condemning the NCAA.

Here’s a sampling of comments from Cousins to the gathered press at the Golden State Warriors practice facility in Oakland, California, on February 21, 2019:

“College basketball, the NCAA is bull****. My advice for him (Williamson) is do what’s best for you and your family. Obviously college isn’t.

“Get ready for the next level, because it’s happening. That’s my opinion, knowing what I know now.

“Obviously when I was at that age, you know, you enjoy the moment, you enjoy the experience and all that. But there’s so many risks involved to get to the ultimate goal, which is this level.

“(I now know) just how crooked the whole NCAA business is.

“How much does Zion Williamson get? That’s who they’re coming to see. So how much does he get?

“Actually, who does it go to?

“How does it benefit any player on that team?

While no one in their right mind would absolve the NCAA from the endemic, shameful exploitation that it has visited upon college basketball players for as long as anyone can remember – and that Cousins rightly points out – the fact remains that NBA players themselves are currently just as responsible for 18-year-old, NBA-caliber players like Zion Williamson being barred from the league as team owners and, yes, the NCAA itself.

Exhibit A: The current rule preventing Williamson – and other gifted 18-year-olds like him – from playing in the NBA right now was originally instituted by the league in 2005 as part of the NBA’s collective bargaining agreement between team owners and players.

In other words, NBA players knowingly signed off on the rule in 2005 and have yet to do what it takes to change it.

Though, as Adrian Wojnarowski reported last October, the players and owners just might be closing in – albeit with all deliberate speed – on a resolution that could, “allow graduating high school seniors to enter the league starting with the 2022 draft.“