Yesterday Sports by Brooks reported that with just a week to go before the Errol Spence Jr.–Mikey Garcia fight at AT&T Stadium in Dallas, a gigantic number of unsold tickets remained for what by all accounts is the first big boxing event of 2019. 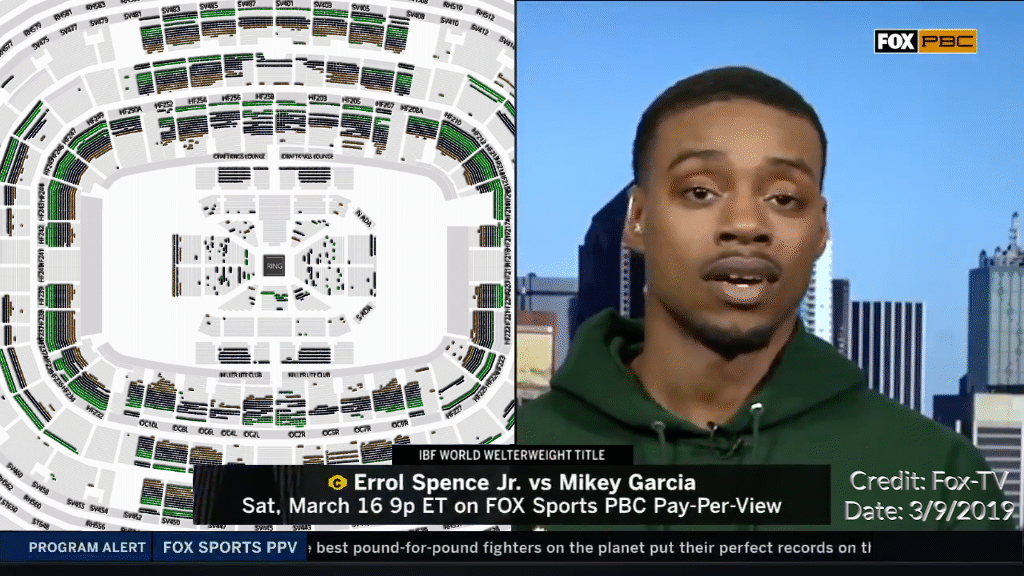 At the same moment the SbB report hit this website Spence was coincidentally being interviewed by fellow boxer and Premier Boxing Champions stablemate Keith Thurman on Fox television.

During the brief conversation with Thurman (see video below), Spence offered as proof why he was, “already the number one welterweight in the world.“:

“My activity, my fighting on Fox pay-per-view, my selling out AT&T Center (Stadium), which is a large, large crowd.”

While Spence’s first two claims may be true, as we reported yesterday, the fight at AT&T Stadium, with now less than a week to go, isn’t close to a sellout.

Knowing how easy it would be for anyone to check online how many seats have actually been sold for the fight, it is hard to imagine that Spence was attempting to deceive the public with his comments to Thurman on Fox-TV yesterday.

Perhaps Spence has been deceived himself by trusting the claims of those responsible for the promotion of the fight – which may or may not include individuals, like Spence himself, in the employ of fight promoter Premier Boxing Champions.

On the bright side – at least as far as Spence and PBC is concerned – if pre-fight promotion continues as it has since the fight was announced on Fox, the damage of such misinformation getting out will be limited almost entirely to those who don’t watch the CBS Sports, NBC Sports and ESPN television networks.