Long before he made history with the Brooklyn Dodgers in 1947, Jackie Robinson was a nationally-known football player who led the UCLA football team to the school’s first undefeated season in 1939.

But 1940 for Robinson and the Bruins was another story.

Gone were Kenny Washington and Woody Strode, the Bruin stars who would eventually re-integrate the NFL and who Robinson teamed with in 1939 to elevate the UCLA football program to unprecedented heights.

And to make matters worse, UCLA head coach Babe Horrell had failed to make up for those vacancies in recruiting, leaving Robinson on an island. 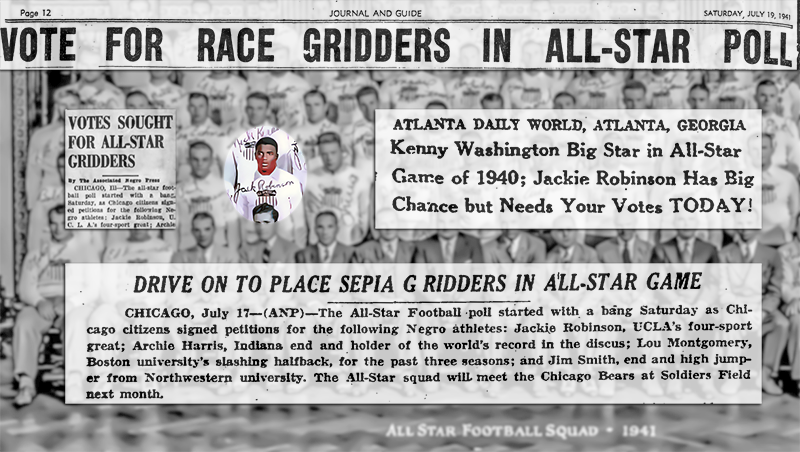 The result was, despite spectacular performances by Robinson throughout the season, a 1-9 record for the Bruins in 1940.

But through it all, the future baseball legend and Civil Rights icon retained his reputation as one of the best college football players in the nation. (The below, amazing video features highlights of Robinson’s greatest game as a UCLA Bruin: a 34-26 victory over Washington State in 1940 that was UCLA’s only win of the season.)

Such status should have resulted in Robinson being a first round selection in the 1941 NFL Draft, which was held two weeks after his final football game with UCLA. But 1940 was right in the middle of the period when the National Football League was barring Black players from the league because of their race.  (The NFL fully acknowledges that the league had a color line from 1934-1945.)

So while it may seem astonishing that two of Robinson’s white teammates, Jack Sommers and Del Lyman,  were taken in the 1941 NFL Draft but Robinson himself was completely passed over, it was anything but to anyone who lived in the United States at the time.

Such an outrageous injustice – like so many facets of the oppression of Black people in the United States past and present – was an open secret among white Americans.

But the same can’t be said for Black newspaper columnists and reporters, who at the time refused to stand idly by in the face of such blatant racism.

Once it became clear that the National Football League was deliberately excluding Black players on the basis of race, Black newspapers exhaustively documented exactly what was happening and eventually began to take direct action.

One prominent example of the latter was how the Black press ensured that Jim Crow National Football League teams were forced to play against Black players in the NFL’s highest-profile exhibition game every season: the Chicago College All-Star Game.

Created by Chicago Tribune Sports Editor Arch Ward – in consultation with NFL founder and Chicago Bears owner and coach George Halas – the Chicago College All-Star Game was an annual preseason game played between the defending NFL Champion and a team of college all-stars at Soldier Field in Chicago.

The yearly exhibition began the same year NFL owners drew the league-wide color line, 1934, and as time went by and no Black players were signed by NFL teams, the Black press eventually targeted the game as a vehicle to take their advocacy on behalf of the victims to the next level.

In the early years of the Chicago College All-Star Game, which was played from 1934-1976, the roster of the college all-star team was determined through fan voting facilitated by ballots printed in hundreds of white newspapers across the United States. In 1939, staffers at Black newspapers and the Associated Negro Press brought the most outstanding Black college football players at predominantly white universities to the attention of their readers in order to boost the number of votes those players received as part of the balloting process for the game.

And so in 1939, no doubt thanks to the efforts of Black-owned media outlets, Black college football stars Bernie Jefferson (Northwestern University) and Horace Bell (University of Minnesota) became the first Black players to appear in the game – and it wasn’t the last time Black newspapers forced the NFL’s defending champion to face college all-star teams that included some of the same Black players that the league was blackballing at the time.

Which brings us to the most notable occasion in which Black newspapers exposed the shameful hypocrisy of racist NFL owners through the placement of a Black players in the Chicago College All-Star game.

Two weeks after playing his final game as a member of the UCLA football team, Jackie Robinson was in Chicago on a road trip with the school’s basketball squad.

Shortly after arriving in Chicago, Robinson dropped in on one of America’s most influential Black businesses at the time: the Chicago Defender newspaper. And as the Defender later reported, it was during that visit to the newspaper’s editorial offices that Robinson was first asked by Defender staffers if he would be interested in playing in the Chicago College All-Star game in August. (Robinson also paid a visit to the newspaper’s headquarters in March, when he was in town with the UCLA track team.)

When the question about participation in the Chicago College All-Star Game was first posed to Robinson at the Defender offices – he was later asked for additional confirmation during his second visit – NFL owners had already passed him over during the league’s recently-completed player draft and UCLA had just wrapped the season with a dreadful 1-9 record.

Given that he wanted to play in the game and that his chance of doing so without the support of Black newspapers was slim to none, Robinson instantly affirmed his interest in participating in the exhibition when asked about it during both of his visits to the newspaper’s offices on Chicago’s South Side. 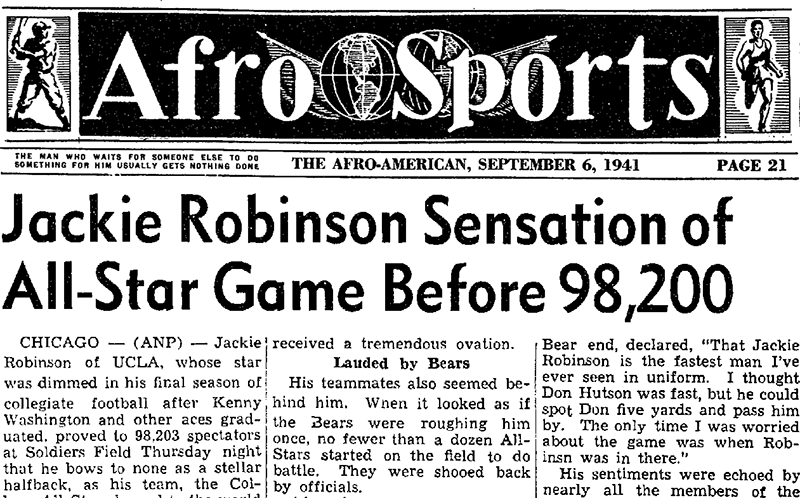 When the voting to determine the college all-star roster opened in July, Robinson was the Black candidate who the Defender, Associated Negro Press, Pittsburgh Courier, Norfolk Journal and Guide, Atlanta Daily World, California Eagle, Washington Afro-American and Philadelphia Tribune, among other Black outlets, most enthusiastically endorsed to readers in the voting campaign to land a Black player in the upcoming Chicago College All-Star Game.

And thanks to the efforts of those Black-owned media outlets, Robinson obtained a roster spot on the 1941 college all-star team that played the defending NFL Champion Chicago Bears at Soldier Field in Chicago on August 28, 1941 – four years to the day before Robinson agreed to sign with the Brooklyn Dodgers.

Playing against a Bears team that was coached by NFL founder George Halas and that included seven future members of the Pro Football Hall of Fame, Robinson dazzled what was at the time the largest crowd ever to see an NFL team play, 92,903, with a performance that befuddled the Bears throughout and culminated in a 36-yard touchdown reception by Robinson that, by all accounts, was the highlight of the evening. (Robinson’s touchdown can be seen in the video above!) 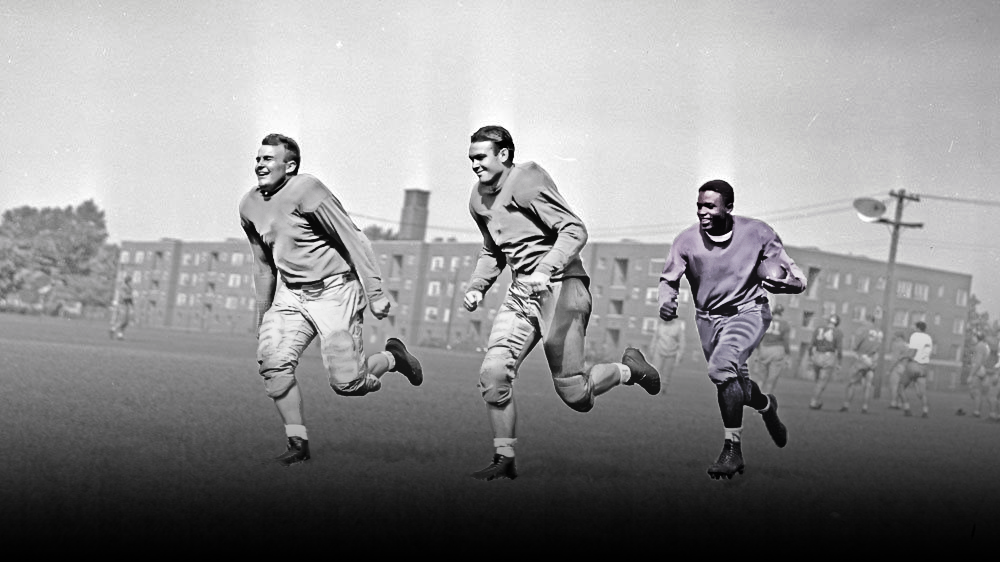 More importantly, as Robinson revealed in initial interviews after his signing with the Dodgers was announced four years later, the two week-long training camp with white college all-star teammates in preparation for the game against the Bears convinced Robinson that the level of acceptance by white teammates that would be necessary for him to pursue the desegregation of Major League Baseball was, indeed, possible.