After word got out Saturday that Antonio Brown had been traded from the Pittsburgh Steelers to the Oakland Raiders, a flurry of images featuring Brown photoshopped into a Raiders uniform hit Twitter. 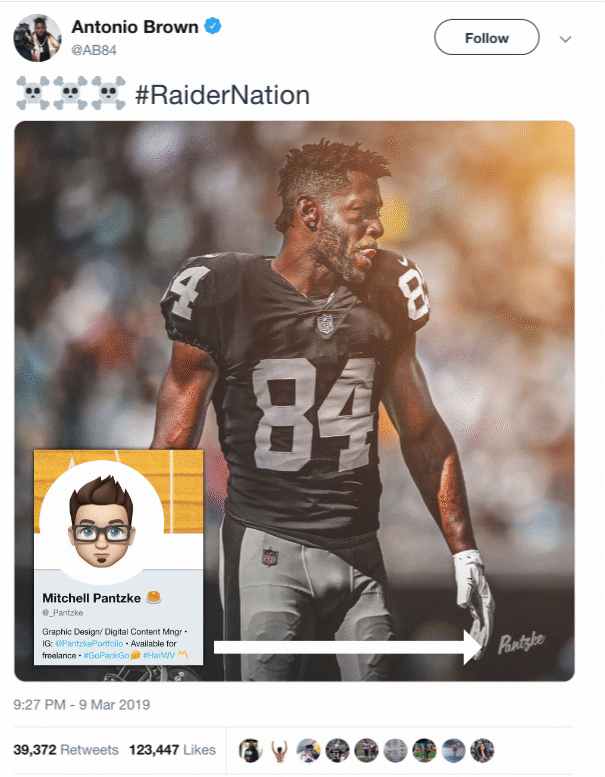 Here is a sampling of the images that went out via Tweets about Brown from Twitters users and the media.

There is a verbal agreement for AB to be traded to the Oakland Raiders, per @AdamSchefter. pic.twitter.com/mYRcfIclbd

I really want Antonio Brown. A true #1 receiver. Opens up the offense. Will give other receivers one on ones. Defenses won't be able to stack the box much with AB here. Derek Carr to AB would be BOOOOOOMIN! @AB84 @Raiders pic.twitter.com/lkFnR28vpP

It appears Antonio Brown is joining the Raiders via his Instagram.#RaiderNation pic.twitter.com/lPMTqp386l

BREAKING: Antonio Brown is heading to the Raiders, per @ProFootballTalk pic.twitter.com/B93aw2fJxP

How Antonio Brown became a Raider, the other two teams that were left with them at the end, and how fragile this thing was on Saturday … All here: https://t.co/5XMoa2SrAx pic.twitter.com/fgMUemWq9x

Television wasn’t immune from joining in as well, as FS1’s First Things First and ESPN’s Get Up! and SportsCenter also featured photoshopped images of the latest player acquisition by the Raiders.

The most notable of all of the doctored images though has to be the one that Brown himself Tweeted out in announcing he was an Oakland Raider.

That particular image was then picked up by media members, sports celebs and, of course, fans.

There it is. Antonio Brown has been traded to the #Raiders, source confirms. https://t.co/tR0SkfrOYt

In today's FMIA column at @NBCSports, you'll find:
🏴‍☠️ Antonio Brown to Raiders, and all the fallout
😐 Why free agency could be a dud
🤔 Le'Veon Bell, Jet? Earl Thomas, Texan?
👰🏽🤵🏽 Reflections on my daughter's wedding
⚾️ T-shirt of the Week
✍️ More: https://t.co/qs64mLy0lR

The bottom-right of the image that Brown originally Tweeted out of himself in a Raiders uniform included a signature that read, “Pantzke.”

It turns out “Pantzke” is a graphic artist named Mitchell Pantzke.

Pantzke, who is based in Wisconsin and attended UW-Stout, revealed exclusively to Sports by Brooks today that the image Brown Tweeted out in announcing the trade was no coincidence.

“Antonio Brown’s camp (photographer Christian Diaz) reached out to me a day before the news broke. Their thought was it would go public that night. So, with that in mind, I had to turn the piece around as soon as I could. …

“… They allowed me to keep my watermark in case tagging didn’t happen. I wanted the mark over tagging, which boded well if other accounts used the piece…Plenty others did.”

Pantzke also took us through the creative process in creating the image while providing background on his relationship with Brown and his representatives:

“The original was pulled from Google images. I looked for a helmet-less base photo to show off Brown’s face and wild hair so it was very recognizable, but emotion-filled. Plus, a chance to photoshop his blonde mustache. The shot shows his confidence, his swagger. … 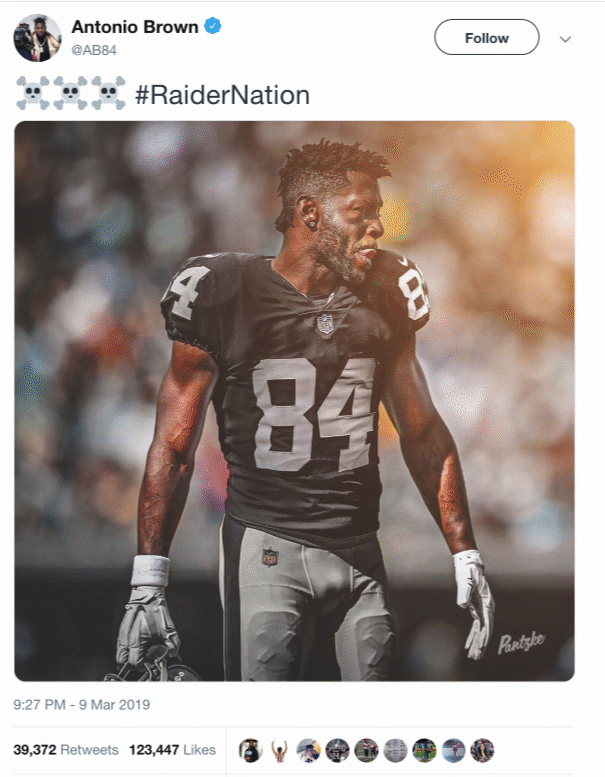 “… This was not the first encounter (with Brown). AB followed me on Twitter, and liked a ton of my creative while I recruited him to Green Bay. Being a marketer, I wanted to capitalize on a fan favorite and show AB in Packers gear as GB became a potential landing spot, so because of this, he saw my creative prior to the Raiders piece.”

Here are the images Pantzke refers to in which the graphic artist places Brown in a Green Bay Packers uniform. 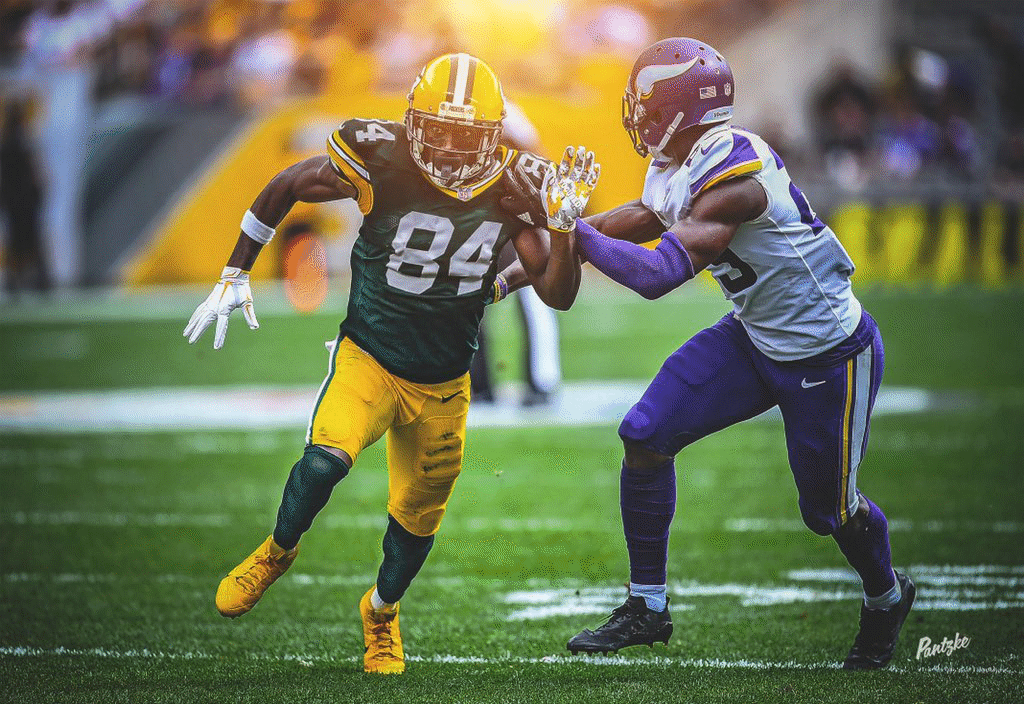 Like our own interaction with Pantzke, the initial communication between the Baldwin, Wisconsin-based graphic artist and Antonio Brown came via Twitter, where Pantzke can be found at @_Pantzke.