ESPN’S DANGEROUS ATTEMPT TO BUY OFF FREEDOM OF THE PRESS 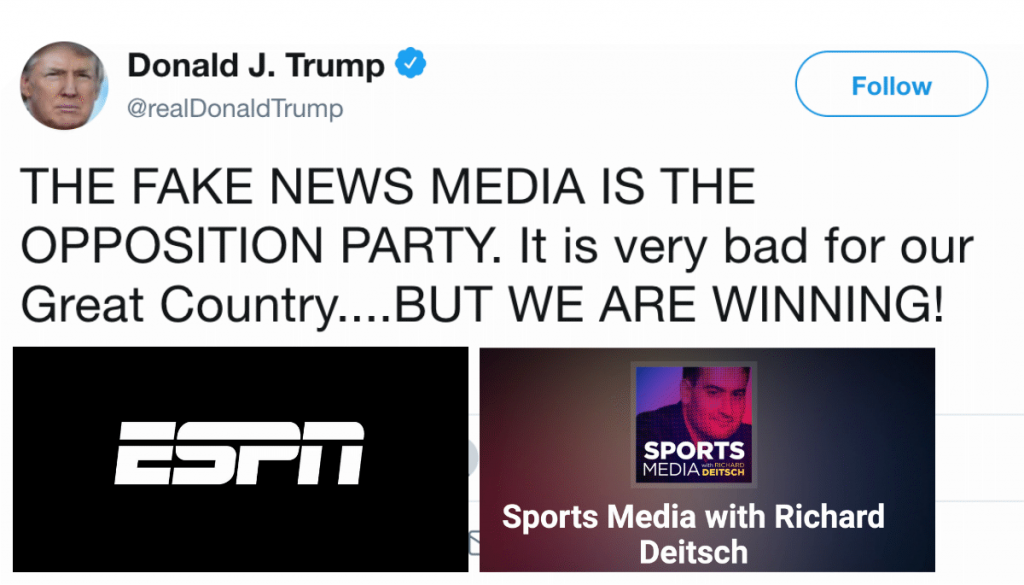 At present, Kay is one of the best-known sports media figures in New York, hosting the highest-rated weekday sports talkshow in America’s biggest radio market while simultaneously serving as the lead New York Yankees TV announcer during baseball season.

Because Kay has owned those jobs for well over a decade in a hyper-competitive, ratings-driven media market that has the reputation for being populated by independent-minded media members, it would be natural to assume that Kay’s employers trust his judgement when it comes to what not to say while he is on-air.

But thanks to Kay unburdening himself yesterday to Deitsch, we now know that such trust – at least according to Kay – has its limits.

“Whether you’re anti-Trump or pro-Trump, even people who are pro-Trump have to realize that the attack on the media is not good for this country. It’s just not. And newspapers and reporters and journalists are being marginalized.

“and the only thing that I’m worried about is that I’m allowed to say whatever I want on the air except that ESPN is very very clear, ‘do not make political statements on the air.’

“whatever your side, the other side, right, left, whichever way you fall, that’s not what this shows about and I tried not to make it be a political statement and I don’t want to tip my hand one way or the other but I just think that the attack on the media will ultimately be very, very damaging for this country.”

You can listen to the entire conversation, in all its contextual glory, here.

In his remarks, Kay correctly condemned Americans who engage in, or advocate for censorship of the press and then, to Kay’s credit and unprompted by Deitsch, the ESPN radio host admitted that ESPN is currently censoring him – ordering him to, “not make political statements on the air.“‘

Kay’s report of course merely confirmed what we already knew after ESPN President Jimmy Pitaro revealed to the media in 2018 that ESPN company policy now included the quashing of on-air political discussion by employees.

That ESPN would practice such a policy in the first place shows that Pitaro and his Disney superiors place money over country.

That Pitaro has tried to codify his ban of on-air political discussion – while in a public setting – as merely standard business practice for a large, influential media company employing a 24-hour broadcast news operation represents nothing short of an existential threat to the United States as ESPN’s unfortunate normalization of media censorship chips away of the foundational principle that created, maintains and perpetuates this nation: Freedom of the Press.