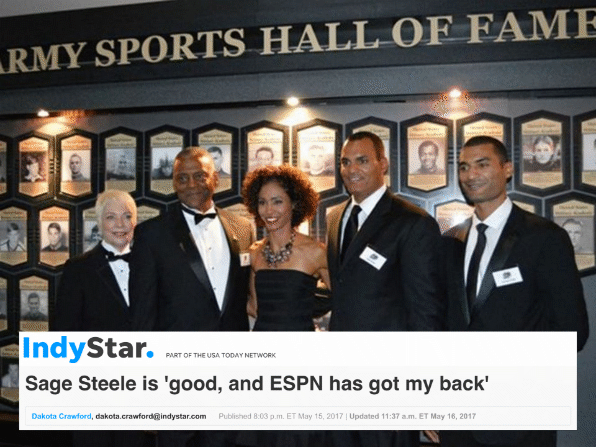 Multiple sources tell SportsbyBrooks.com that officials at the Augusta National Golf Club, which hosts the annual Masters tournament, have demanded that ESPN drop African-American Sage Steele from hosting its on-air coverage at the Augusta golf club.

Last week the INDIANAPOLIS STAR reported that Steele, who has covered The Masters since 2017 for ESPN, was, “believed to be the first black woman to cover the Masters.”

Augusta National’s demand to remove Steele from future ESPN Masters broadcasts as a host in Augusta was due, SportsbyBrooks.com has learned, to remarks she reportedly made to the Star two weeks ago.

In the article, Steele, whose father Gary is the first African-American to play varsity football for the United States Military Academy at West Point and is featured with his daughter in a documentary that can currently be seen on ESPN.com, noted of Augusta National’s exclusionary membership policies, “It isn’t the prettiest history, for sure, and that is putting it very, very kindly.“

More from the Star story:

After Steele’s first year at the Masters in 2017, she heard a story she will never forget. A friend of hers, a white woman whose godfather is black, told Steele her godfather started crying when he saw Steele covering the Masters.

“I might be a little intimidated coming to this, but darn right I’m going to keep coming,” Steele said. “I might be out of my comfort zone, but that’s why I need to do it.”

Since opening in 1933, the Star reported that Augusta National Golf Club has admitted one African-American male member and two female members.

After signing a multiyear contract with ESPN in 2017, Steele told the Star, “My family knows I’m good and ESPN has got my back.“

UPDATE: When contacted by SportsbyBrooks.com and asked if Sage Steele would serve in the same on-air capacity for ESPN in Augusta for The Masters in 2020 as she did in 2019, an ESPN spokesman declined comment.