NFL Network analyst Charley Casserly caused quite a stir earlier this week when he reported that top NFL Draft quarterback prospect Kyler Murray had performed extremely poorly during interviews with three NFL teams at the league’s scouting combine the previous weekend in Indianapolis. 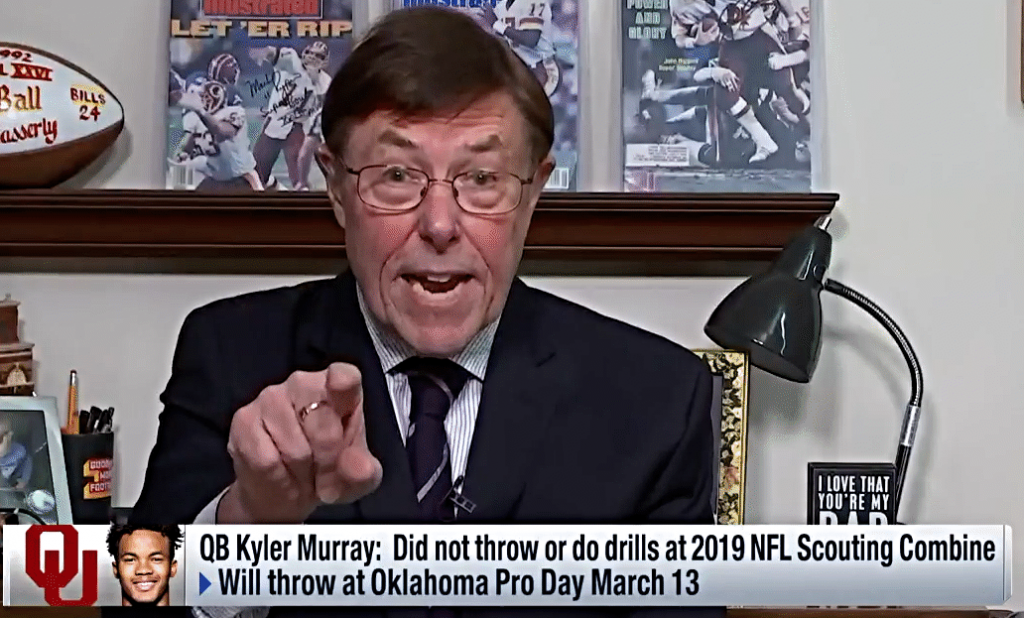 “Well, he better hope (Arizona Cardinals head coach Kliff) Kingsbury takes him No. 1 because this (Murray’s performance during interviews) was not good.

“This was the worst comments I ever got on a high-rated quarterback, and I’ve been doing this a long time. I’ve probably been doing it longer than you’re (Siciliano) alive.

“The board work, below not good. Not good at all in any of those areas and raising major concerns about what this guy is going to do.

“This guy is not outstanding in those areas. It showed up in the interview.”

Given Casserly’s extensive experience as an NFL General Manager with the Washington Redskins and Houston Texans along with Murray’s decorated football career at the University of Oklahoma – which was capped by a Heisman Trophy – many were surprised and somewhat mystified by Casserly’s extraordinary claims about Murray’s interview ineptitude.

Then came an interview with Casserly yesterday on ESPN Radio in New York that – thanks to a somewhat unwitting Casserly – explained everything.

Excerpt from Casserly during his interview on ESPN 98.7 in New York on Wednesday:

“Clearly this guy was not trained for the interview. Just listening to it. I train players. I train over 100 players a year for Combine interviews. This guy wasn’t trained.”

It turns out that Casserly, per what he let slip during that interview with ESPN Radio show host Michael Kay and a 2016 article authored by Liz Mullen for SPORTSBUSINESS JOURNAL and exhumed by the inexhaustible Mike Florio of profootballtalk.com, is now in the business of preparing NFL Draft prospects for the same type of interview at the scouting combine that he claimed Murray had essentially flunked on multiple occasions.

Thanks to what couldn’t be a clearer conflict of interest, we now have a pretty good idea why Casserly might climb out on the . limb that he did with his borderline bizarre criticisms of Kyler Murray’s interviewing skills during the NFL combine.

A limb that – thanks to Casserly’s own loose lips – has since snapped.