Adam Beam of the ASSOCIATED PRESS in Sacramento and KPIX-CBS in San Francisco report this week that the state of California has enacted a new law that strengthens an existing statute that “already limits full-contact practices for middle and high school football teams to no more than 90 minutes per day.” 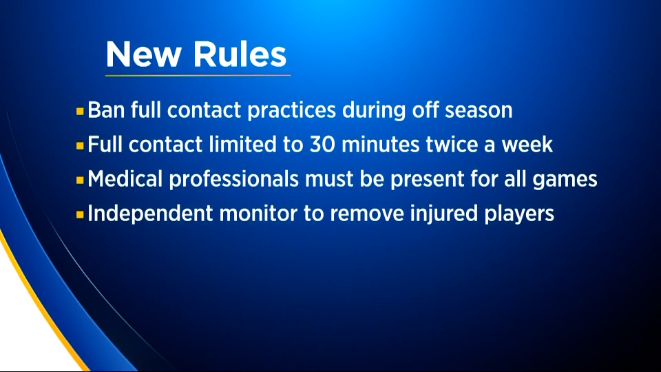 The law, which was authored by Democratic Assembly man Jim Cooper, “also requires a medical professional be present for all games and an independent person attend all practices with the authority to remove players who show signs of an injury.”

The intended purpose of the statutes is to prevent chronic traumatic encephalopathy, or CTE, which is a degenerative brain disease known to result from repeated blows to the head suffered by American football players.

In a sign of what may be the next step in the attempt to future inhibit CTE from developing in youth football players, last year Democratic Assemblyman Kevin McCarty introduced a bill that would have banned anyone from playing organized tackle football younger than 12.

Should children under the age of 12 be allowed to play tackle football?

Though the bill did not pass, if the continuing results of a recent poll conducted among the 80,000 followers of Sports by Brooks is any indication, such a rule is likely to also be passed into law in the state of California sooner than later.