On March 14, 2019, 48 hours after the United States Justice Department announced it had caught red-handed dozens of mega-wealthy parents conspiring to fraudulently obtain admission into elite universities for their under-qualified sons and daughters as part of the largest college admissions scandal in United States history, NFL Hall of Fame quarterback Joe Montana shocked his Twitter followers with the following Tweet:

Mr. Singer’s company provided nothing more than minimal consulting services to our family, like so many other families, with the college application process. Fortunately our kids were able to pick from a number of schools to attend due to their hard work and their merit.
Thanks

The “Mr. Singer” Montana referred to in his Tweet to is 58-year-old Californian Rick Singer, who has been identified by the FBI and IRS as the ringleader of a vast, now-well-publicized criminal enterprise expressly designed to admit children of super-wealthy parents into universities for which the kids were academically and athletically unfit.

Mr. Singer's company provided nothing more than minimal consulting services to our family, like so many other families, with the college application process. Fortunately our kids were able to pick from a number of schools to attend due to their hard work and their merit.
Thanks

For nearly two weeks after Montana decided to acknowledge his tie to the now-admitted perpetrator of innumerable crimes, the media and public remained mystified as to why the NFL Hall of Famer would Tweet what he did when he did it.

Then, last Friday, SportsbyBrooks.com broke the news that Montana’s Twitter admission was due to a now-deleted Facebook post by Singer in which he listed Montana as a client. The Facebook post can be seen in its entirety as part of SportsbyBrooks.com’s coverage of what has been indentified by the U.S. Justice Department as an ongoing investigation.

Along with Montana, Singer identified several other mega-wealthy individuals in the Facebook post as clients of his oft-extralegal services including  including Apple icon Steve Jobs, NBA owner Mark Mastrov and NBA superagent Bill Duffy.

Now SportsbyBrooks.com can exclusively reveal another link between Singer and Montana. 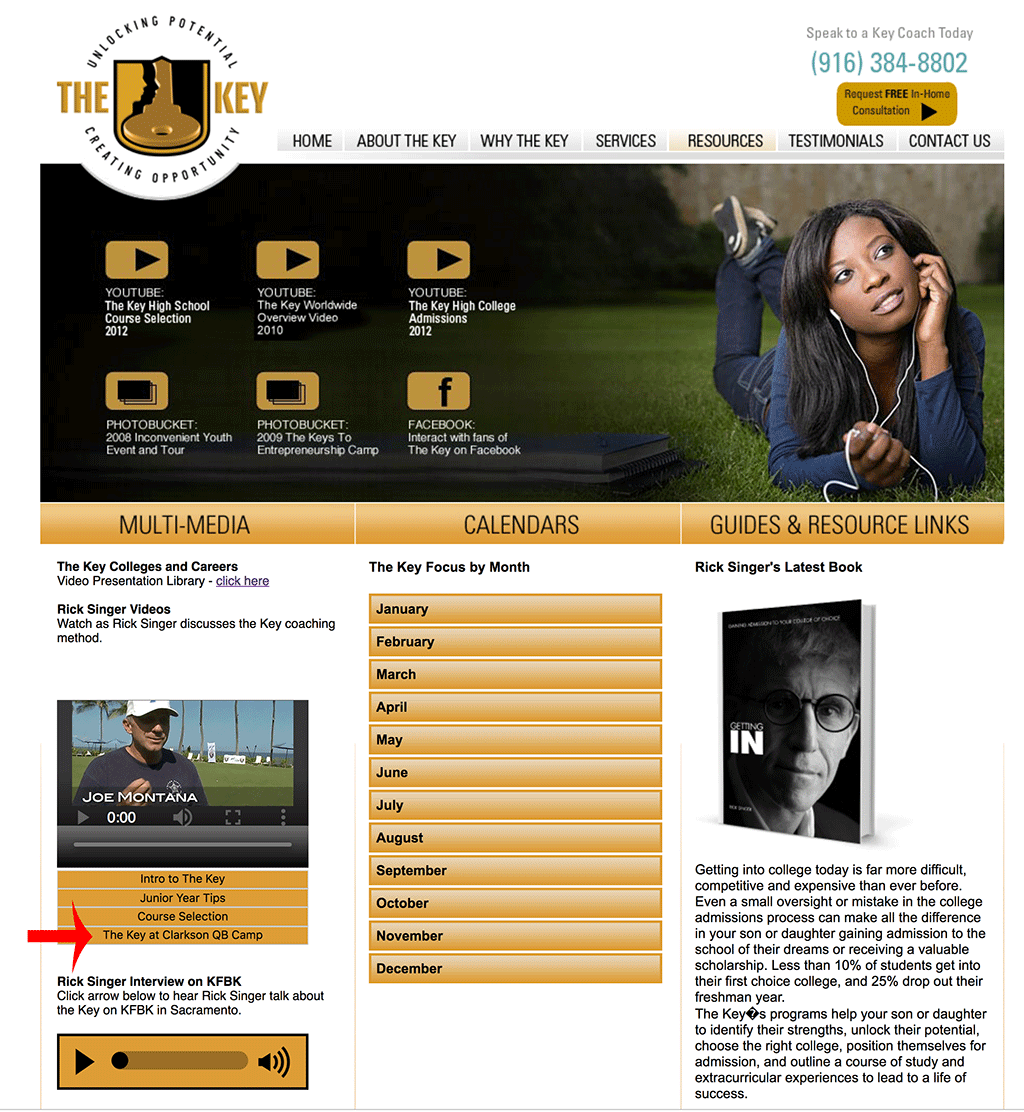 On March 12, 2009, the day the United States Justice Department first announced the case against Singer and dozens of wealthy parents, university coaches and administrators, a page on Singer’s now-deleted website, which can be seen above, featured a playable video titled, “The Key at Clarkson QB Camp.“

Set at a resort in Maui and shot during the first week of July, 2009, The Key at Clarkson QB Camp essentially serves as a slick sales piece positioned to convince parents to send their sons to be schooled in the finer arts of football by private quarterback coach Steve Clarkson.

Montana, Warren Moon, Clarkson, NFL agent David Meltzer and Singer are all part of the eight-minute, on-camera pitch for what has long been a multi-million dollar business for Clarkson, a former college quarterback who is well-known for having trained some of the biggest QB names in the sport.

Montana, Moon, Clarkson, Meltzer and Singer all play speaking roles in the production, though ESPN reporter Tom Luginbill, NFL agent Leigh Steinberg and former USC and NFL quarterback Matt Leinart are also introduced and in the case of Luginbill, touted by Clarkson himself.

The film is only a part of what SportsbyBrooks.com has learned about the connection between Singer and the big business that is college football and high school basketball recruiting – and how at least a portion of it directly relates to his now-admitted crimes.

Expect more daily exclusives on the subject to be immediately forthcoming at SportsbyBrooks.com.