While appearing on the Sports Illustrated Media Podcast this week, James Andrew Miller, best-selling, co-author of the definitive history of ESPN, 2011’s Those Guys Have All The Fun, issued rock-solid confirmation of an earlier, speculatory report that ESPN is looking to make a seismic-level hire for the Monday Night Football broadcast booth. 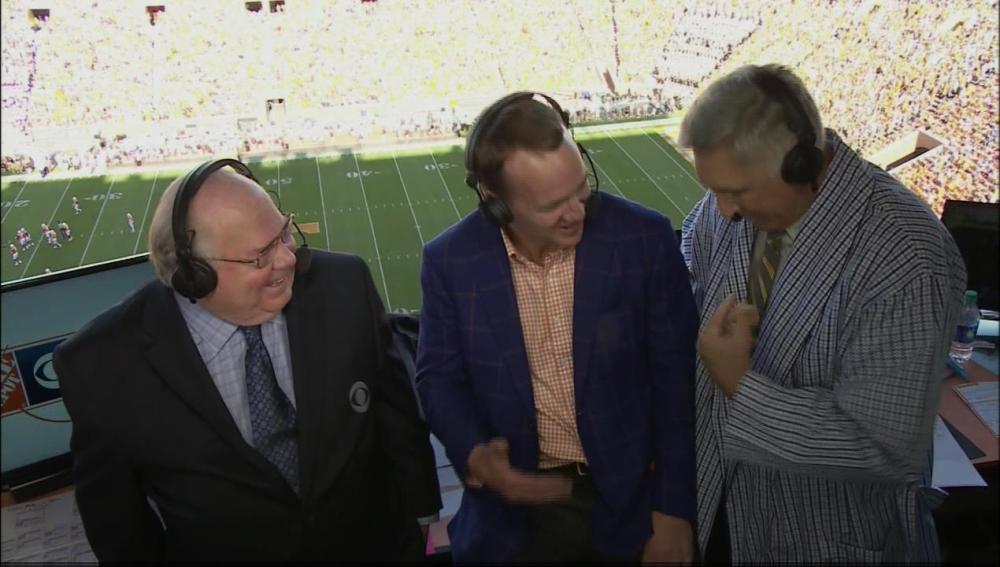 Don’t Expect a Three-Man Booth For Manning Anytime Soon. If Ever.

Thanks to years of research and interviews for his ESPN book, Miller has a rolodex stuffed with past and present ESPN employees so when he speaks about possible on-air talent personnel moves at the network, people listen.

Following the abrupt departure of now-Dallas Cowboy Jason Witten, speculation has abounded over who exactly will man ESPN’s Monday Night Football booth in 2019.

Most prominent amongst recent reportage on the subject is a March 4 article by Andrew Marchand of the NEW YORK POST. In it Marchand reported that ESPN remained in hot pursuit of a certain Hall of Fame NFL quarterback for the network’s MNF booth:

In the near term, ESPN likes the post-Witten base it has with play-by-player Joe Tessitore and Booger McFarland, but it will still make the requisite inquiry into (Peyton) Manning, though the expectation is Manning will stay on the sidelines.

A year ago, ESPN was willing to top Jon Gruden’s $6.5 million for Manning. It would do that again and has developed an expanding relationship with the legendary quarterback through his ESPN+ show, “Detail.”

Barring a Manning Hail Mary, the immediate expectation is ESPN will keep Tessitore and McFarland and may just switch to a traditional two-man booth.

Traina: “Is the plan from what you’re hearing to go with (2018 MNF play-by-play announcer Joe) Tessitore and Booger (McFarland, 2018 MNF color analyst and sideline reporter) and then if Peyton (Manning) decides he wants to do it, then go all in on him?“

Miller: “Yes. I believe, from everything I’ve heard, that it is going to be the two of them (Tessitore and McFarland) and the only third possibility would be Peyton.“

That both Miller and Marchand indicate that Manning remains in play can’t help but indicate that the media debate on the subject is unlikely to abate, barring a public disavowal from Manning, anytime soon.