AUDIO: BILL SELF SURE SOUNDS LIKE HE WANTS TO COACH IN THE NBA

One of the best podcasts – in any sport – is the Good N’ Plenty pod from longtime college basketball reporter Jeff Goodman. 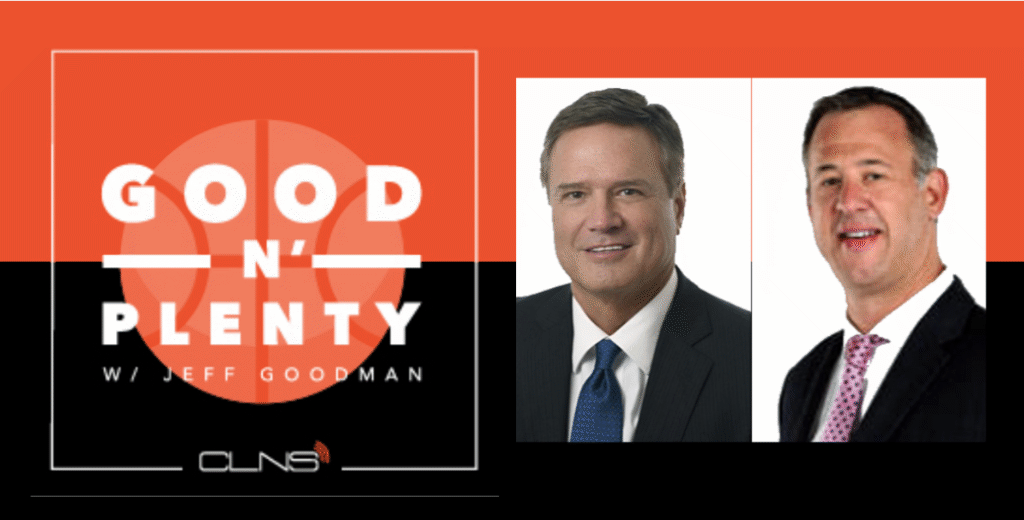 Appearing On Jeff Goodman’s Podcast, Bill Self Sure Sounded Like He Wants To Coach In The NBA

Twice weekly Goodman lands interviews like Zion Williamson‘s high school coach, a far-from-typical visit with the hottest coach in college hoops, an NBA end-of-the-bencher and a (amazingly candid) coach who is facing the firing line.

Typical of Goodman’s interviews was his recent visit with University of Kansas basketball coach Bill Self.

If you ever wondered if Self, who is among the subjects targeted by the current, sweeping FBI investigation into college basketball recruiting violations, wants to coach in the NBA, listen to his response after Goodman (artfully and repeatedly) puts the question to him.

Goodman: “So everybody thinks that you are gonna be the head coach of the San Antonio Spurs at some point. You hear this I assume all the time because of your relationship with R.C. Buford, who runs the Spurs. So you guys went to high school together? Or Oklahoma State together? Or both? What is it?“

“R.C. and I never once talked about that. Anyone who brings that up is not in the know. I kind of hope Pop (San Antonio Spurs Coach Gregg Popovich) goes forever I think he’s so good for our sport. I hope he continues to coach for as long as he possibly can.”

Goodman: “Do you have any desire to coach in the NBA at some point?

“Is that something you’ve ever really given thought to especially with watching Brad Stevens and Billy Donovan have some success (in the NBA)?“

Self: “Oh yeah, well they both had a ton of success and their personalities at least to me seem like they both fit perfectly where they’re at but you know I think anybody that says they never thought about it would be probably not being truthful but as far as any serious thought, I haven’t given it any serious thought.

“I honestly feel that you’ve got to know your wheelhouse, your strengths, and I feel personally that, and you’ve been around this place, it’s not one of the best jobs in college, it’s one of the best basketball jobs period. And certainly I’ve enjoyed every moment being here at KU.”

Goodman: “I’ve seen enough of your practices to know and  I don’t know if you’ve thought about this too, if you had to go from College to the NBA how much would you have to change your approach because I’ve always said that you and (Michgian State Coach Tom Izzo) are similar in terms of tough love.

“You’re gonna get into guys but you’re gonna put your arm around guys afterwards and make sure they know you’re there for them and that you believe in them.

“Can you do that in the NBA these days?”

Self: “I think that no matter what level you’re at there’s going to be a little bit of adjustment.

“You don’t go from high school to college and coach the same way, or go from college to high school, or whatever, you’re going to have to adjust to personnel and personalities and those sorts of things and I think one of the big, big challenges at the highest level would be coaching and getting the most out of guys that all maybe are motivated by different things and there’s no right or wrong on motivation.

“College is a little different, we’re all motivated by team winning, you know those sorts of things, and so it is different I would think that guys we’ve coached in college that have gone on to the NBA probably say, ‘oh, college was a lot different.’

“But I think anybody would say that. I don’t think it’s a right or wrong deal.

“I think you tweak based on your clientele and certainly with that being said you got to get the most out of them and get them operating against their ceiling as much as they possibly can and the way you do it in college may be a little bit different than the pros but what I found out is that kids want to get better regardless of how old they are. They want to get better they want to improve. They want to be good.

“I think if you can show them how they can improve and be good I think they listen to you at whatever level.”

Based on Self’s parsed, halting, beyond-carefully-worded rhetoric, he might as well be shouting from the rooftops that he wants to coach in the NBA.

UPDATE (3/12/2019, 11:15am PT): In the original iteration of this post, Sports by Brooks did not include a portion of Self’s remarks. Those remarks were as follows:

Bill Self: “I honestly feel that you’ve got to know your wheelhouse, your strengths, and I feel personally that, and you’ve been around this place, it’s not one of the best jobs in college, it’s one of the best basketball jobs period. And certainly I’ve enjoyed every moment being here at KU.”

The above post has been updated to include the remarks as has the audio portion of the post.

Jeff Goodman himself had nothing to do with this post. We did not contact or consult him about the post nor did he ever contact us about the podcast episode he did with Bill Self nor any other episode of the Good N’ Plenty podcast.

Sports by Brooks takes full responsibility for the content of this post and, in hindsight, should not have left the remarks out of the transcript and audio.

Part of the regret we have for not including the text and audio is the fact that it does not change our opinion in any way about the desire Self has to coach in the NBA.

Either way it could not be more clear to us – from the complete transcript and audio of his remarks – that Self wants to coach in the NBA.