On August 14, 2014, Rick Singer, the admitted ringleader of what the United States Justice Department on March 12, 2019, characterized as the largest college admissions scandal in United States history, published a post on one of the Facebook pages he utilized in promoting the company he used to perpetrate his crimes. 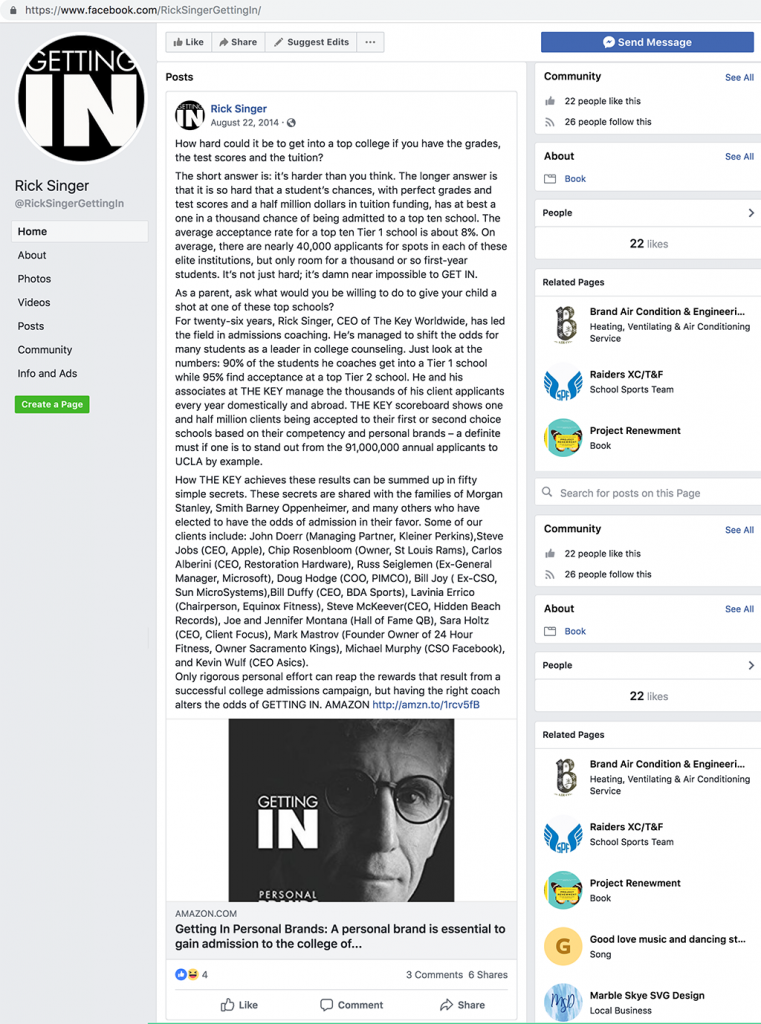 The text of the post, which is no longer available on Facebook and has never been republished in its entirety, is below:

How hard could it be to get into a top college if you have the grades, the test scores and the tuition?

The short answer is: it’s harder than you think. The longer answer is that it is so hard that a student’s chances, with perfect grades and test scores and a half million dollars in tuition funding has at best a one in a thousand chance of being admitted to a top ten school. The average acceptance rate for a top ten Tier 1 school is about 8%. On average, there are nearly 40,000 applicants for spots in each of these elite institutions, but only room for a thousand or so first-year students. Its not just hard; it’s damn near impossible to GET IN.

Asa parent, ask what would you he willing to do to give your child a shot at one of these top schools? For twenty-six years, Rick Singer, CEO of The Key Worldwide, has led the field in admissions coaching. He’s managed to shift the odds for many students as a leader in college counseling. Just look at the umbers: 90% of the students he coaches get into a Tier 1 school while 95% find acceptance at a top Tier 2 school. He and his associates at THE KEY manage the thousands of his client applicants every year domestically and abroad. THE KEY scoreboard shows one and half million clients being accepted to their first or second choice schools based on their competency and personal brands -a definite must if one is to stand out from the 91,000,000 annual applicants to UCLA by example.

Only rigorous personal effort can reap the rewards that result from a successful college admissions campaign, but having the right coach alters the odds of GETTING IN. AMAZON http://amzn.to 1rcv5FB